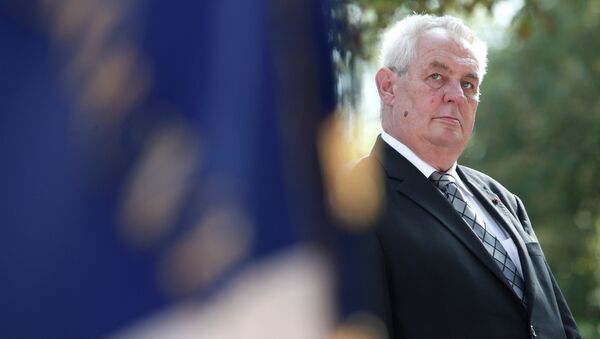 The Czech President says that providing financial aid to Ukraine during a civil war is “complete nonsense” and a waste of money, because the risk of default pushes the Kiev authorities to constantly look for enemies in a bid to avoid responsibilities.

“It’s very important to realize that Ukraine is in civil war. We should not engage in some support dreams, because financial support in the context of civil war is complete nonsense,” he said in an interview with Channel One Russia broadcaster.

“Any financial aid during a civil war is a waste of money,” Zeman stressed.

In response to a question about the expected length of the Ukrainian crisis, the Czech leader said that the risk of default pushes the Kiev authorities to constantly look for enemies in a bid to avoid responsibilities.

"The risk of going bankrupt looms in the Ukraine. If there was no such risk…, there would be real peace in a few months. The only obstacle is the risk of default. Our enemies are responsible for all the bad things. [Kiev] has to find enemies even if there are no any. Others are always responsible for default," Zeman said.

Kiev authorities launched a military operation against independence supporters of southeastern regions of Ukraine in April. The sides have reached a ceasefire agreement in September, but have been accusing each other of violating the truce. According to UN data, fighting has killed more than 4,000 people and injured over 9,000.

As a result of the ongoing political crisis in the country, Ukraine is currently on the verge of a default. Kiev authorities are trying to rescue the country's economy with international loans.