‘No Obvious Solution’ for Dealing With Jihadists Returning to UK: Expert 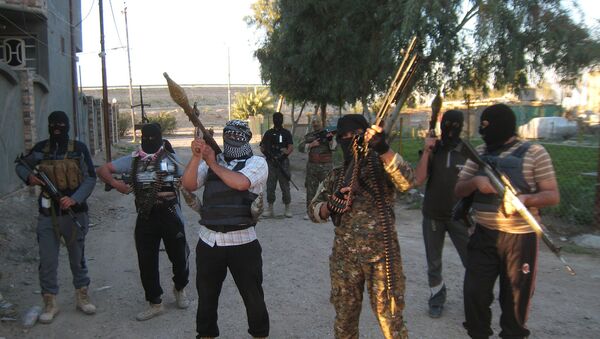 © AP Photo
Subscribe
Lecturer at the Centre for the Study of Terrorism and Political Violence Dr. Gilbert Ramsay is doubtful of the efficiency of deradicalization by preventing UK Jihadis from returning home, as proposed by the government.

ST ANDREWS, November 15 (Sputnik), Mark Hirst —A leading authority on terrorism, Dr. Gilbert Ramsay, has told Sputnik Saturday that there is no obvious solution to deradicalizing those who have been fighting Jihad abroad and described proposals by the British Government to ban individuals re-entering the UK as having "dubious legality".

"I think that preventing Jihadis from entering the UK is probably a dubious policy of dubious legality," Ramsay, a lecturer in International Relations at the Centre for the Study of Terrorism and Political Violence at St Andrews University said, adding, however, that there was limited success with such deradicalization processes and no clear solution to the wider issue of dealing with returning Jihadis.

"Recidivism has been a significant issue on much-trumpeted deradicalization processes in countries like Saudi Arabia and Yemen, so clearly this is a difficult issue without any one obvious solution," Ramsay noted.

Ramsay was responding after UK Prime Minister David Cameron announced plans to ban Jihadi fighters from coming back to the UK if they were suspected of, or known to have been fighting with extremist Muslim groups abroad.

Under the proposals Jihadi suspects would have their UK passports cancelled and their names added to an international "no-fly" list.

But Ramsay warned simply exiling suspected extremists did not necessarily reduce the risks posed by terrorists.

"It's worth bearing in mind that the radicalization of al-Qaeda came with Bin Laden's being exiled by Saudi Arabia, which essentially left him with no option other than to escalate his jihad," Ramsay told Sputnik.

"Having said that, it clearly does make sense for the British state to monitor returning Jihadis closely, and also to have some sort of reintegration process which those who wish to reintegrate into British society can enter into," Ramsay said. "I suspect that the actual nuts and bolts of such a process might matter less than the mere fact of it being possible for those who wish to renounce their previous affiliations and recommit to the British state to have a formal mechanism for doing so," he added.

The UK Government has confirmed it plans to introduce the new legislation as part of the Counter-Terrorism Bill at the end of January 2015.

Early in October, NATO Secretary General Jens Stoltenberg admitted that the Europeans fighting for the Islamic State Sunni Jihadist group in Syria and Iraq pose a threat to NATO member states upon their return home. The UK Police estimates the number of Britons who have fled to the Middle East to take part in terror-related activities at 500.