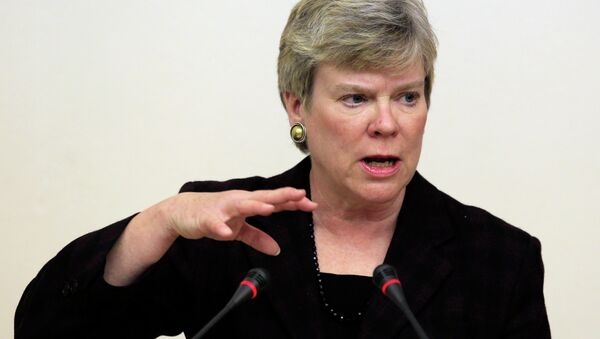 Russia's Foreign Ministry is ready to meet with US Under Secretary for Arms Control and International Security Rose Gottemoeller during her visit to Moscow on November 21-22.

MOSCOW, November 14 (Sputnik) — Russia's Foreign Ministry is ready to hold a meeting with the US Under Secretary for Arms Control and International Security Rose Gottemoeller, who will be in Moscow on November 21-22, a source in the ministry told RIA Novosti on Friday.

"If there is a request to hold a meeting, it will be organized," the source said.

The US State Department announced Thursday that Gottemoeller was going to Moscow to "take part in a conference panel discussion about the elimination of Syria's chemical weapons program."

Moscow will host the 2014 Nonproliferation Conference: Energy, Disarmament, and Nonproliferation on November 20-22 with Syria's chemical weapons and Iran's nuclear crisis expected to be on the agenda.

As the event organized by the Center for Energy and Security Studies (CENESS) will take place just before the deadline of the P5+1 talks with Iran, resolving Iran's nuclear crisis is going to be one of the main topics on the agenda, CENESS reported on its website.

Moreover, the issues of Syria's chemical weapons disarmament, denuclearization of the Korean peninsula, nuclear safety after the Fukushima explosion and nuclear security will be reviewed among other topics.

About 150 experts on security and nonproliferation from think tanks and government agencies of 30 states, including China, North Korea, Germany, Iran, Israel, Pakistan and the United States, will participate in the conference.

Moscow Nonproliferation Conference will precede the 2015 Review Conference of the Parties to the Treaty on the Non-Proliferation of Nuclear Weapons (NPT) that will be held in New York and will mark the 20th anniversary of the NPT's indefinite extension.