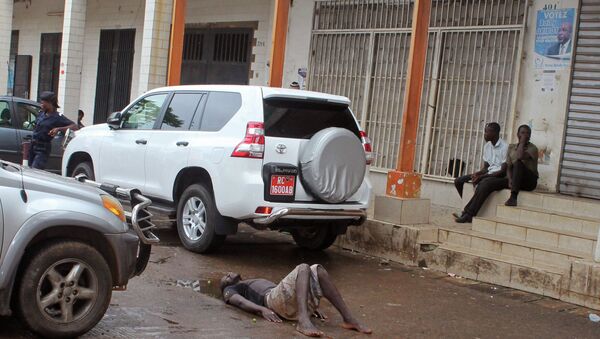 © AP Photo/ Youssouf Bah
Subscribe
An expert on Northeast Asia claims that Asia-Pacific Economic Cooperation countries to discuss financial aid to halt Ebola epidemic during the summit scheduled for next week in Beijing.

"Japan committed $100 million to help West Africa combat Ebola days before the APEC meeting. Other countries are expected to follow suit, and a discussion on global efforts to pool financial resources and offer expertise to deal with the outbreak is expected," program associate for Northeast Asia at the Woodrow Wilson International Center for Scholars in Washington, DC, Shihoko Goto, said Friday.

"Discussions on how to stop the disease from spreading beyond Africa, and ways in which to prevent cross-border outbreaks should also be part of the talks," Goto added.

On Friday, Japan's government said it would allocate some $100 million towards treatment of the Ebola virus, prevention measures, and aid in stabilizing communities suffering from the epidemic. The funds come in addition to the $40 million announced by Japan's Prime Minister Shinzo Abe in September.

Several countries including China, Canada, and Bolivia have already donated money towards treating and containing the disease.

Goto referred to data released from the World Bank this month when stating that the disease will cost some $359 million in the short term for Guinea, Liberia, and Sierra Leone.

The current Ebola epidemic started in Guinea in December 2013 and later spread to Liberia, Sierra Leone, Nigeria and Senegal, however, Senegal and Nigeria have recently been declared free of Ebola by the World Health Organization (WHO). Ebola cases have also been registered in the United States and Europe.

According to the most recent estimates from the WHO, the Ebola outbreak has claimed some 4,960 lives.