Romania’s Prime Minister Leading in First Round of Presidential Elections 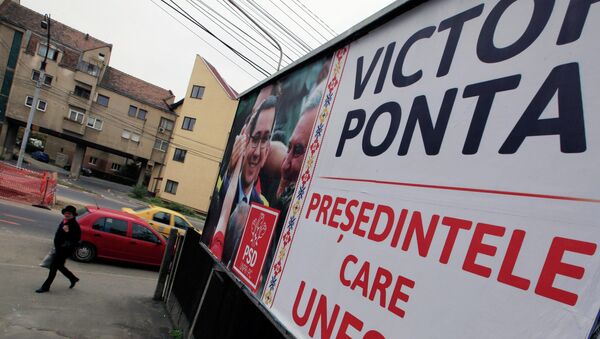 © REUTERS / Radu Sigheti
Subscribe
According to the results of exit polls published by the Romanian Mediafax agency, Romania's Prime Minister is leading in the first round of the presidential elections with 38-41 percent of the votes and to compete in the November 16 runoff with his rival Klaus Iohannis, who received 31 percent.

MOSCOW, November 3 (RIA Novosti) — Romania's Prime Minister Victor Ponta is leading in the first round of the presidential elections with 38 — 41 percent of the votes, exit poll revealed Sunday.

Therefore, Ponta and Iohannis will compete in the runoff on November 16.

Former prime minister Calin Popescu Tariceanu, and former ministers Elena Udrea and Monica Macovei gained between 4 percent and 6 percent of the votes, according to the polls.

In his election campaign Ponta has pledged to cut taxes, increase pensions, maintain friendly relation with both the European Union and China and even hold a referendum on the restoration of monarchy.

The current prime minister has strained relation with the incumbent president, who marred Ponta's election campaign, claiming he served as a spy in 1990s, which Ponta called a slander.

Romanians came to presidential elections on Sunday to choose the successor of the incumbent Traian Basescu.