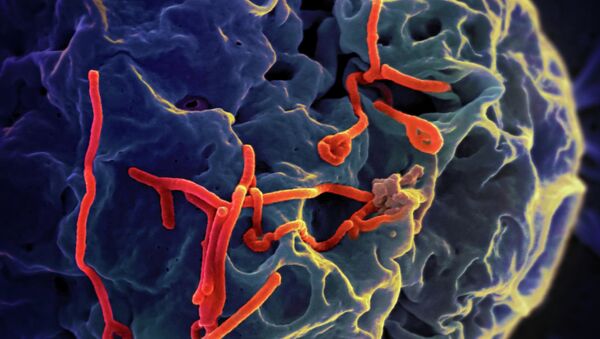 Paul Craig Roberts
All materialsWrite to the author
The US federal government has announced that thousands of additional US soldiers are being sent to Liberia.

ATLANTA, October 29 (RIA Novosti) — The US federal government has announced that thousands of additional US soldiers are being sent to Liberia.  General Gary Volesky has said that the troops would “stamp out” Ebola. The official story is that combat troops are being sent to build treatment structures for people who are infected with Ebola.

Why combat troops?  Why not send a construction outfit such as the US Army Corps of Engineers if it has to be military? Why not do what the government usually does and contract with a construction company to build the treatment units? “Thousands of additional troops” would result in a very large, very inexperienced construction crew for 17 treatment units. It doesn’t make sense.

Stories that don’t make sense and that are not explained naturally arouse suspicions, such as: are US soldiers being tested on in order to develop Ebola vaccines and cures, or are they, perhaps, being used to bring more Ebola back to the US?

I understand why people ask these questions. The fact that they will receive no investigative answer will deepen suspicions.

Uninformed and gullible Americans will respond: “The US government would never use its own soldiers and its own citizens as guinea pigs”. Before making a fool of yourself, take a moment to look into the many experiments the US government conducted on American soldiers and citizens. For example, search online for “unethical human experimentation in the United States” or “human radiation experiments”. You will find that federal agencies such as the Department of Defense and Atomic Energy Commission have: exposed US soldiers and prisoners to high levels of radiation, irradiated the testicles of males in order to test for birth defects (high rate resulted), irradiated the heads of children, and fed radioactive material to mentally disabled children. Perhaps the best known is the Tuskegee syphilis experiment, where the US Public Health Service spent four decades observing the effects of the disease on 600 poor African-Americans from Alabama without informing them that they had it or providing a known treatment that would have cured them.

The Obama regime’s opposition to quarantine for those arriving from West Africa is also a mystery.  The US Army has announced that the Army intends to quarantine every US soldier returning from deployment in Liberia. The Army is sensibly saying that an abundance of caution is required in order to minimize the risk of transferring the Ebola outbreak to the US. However, the White House has not endorsed the Army’s decision, and has expressed opposition to the quarantines ordered by the governors of New York and New Jersey.

Apparently pressure from the White House and threats of law suits from those subject to quarantine have caused the two states to loosen their quarantines.  A nurse returning from treating Ebola patients in West Africa has been cleared by New Jersey for discharge after being symptom-free for 24 hours instead of the 21 days it takes for the disease to produce symptoms. The nurse threatened a lawsuit, and the false issue of “discrimination against health care workers” has arisen.  How does quarantining those with the greatest exposure to Ebola constitute discrimination?

Once symptoms appear, an infected person is dangerous to others until he or she is quarantined. As the CDC has been forced to admit, after stupidly denying the obvious fact, the current Ebola strain can spread by air. All it takes is a sneeze or a cough or a contaminated surface.

In other words, it can spread like the flu.  Previous denials of this fact helped create suspicions that the new Ebola strain is a weaponized biowarfare strain created by US government labs in West Africa.  As University of Illinois law professor Francis Boyle has revealed, Washington placed its biowarfare laboratories in African countries that hadn’t sign the convention banning such experimentation.

Washington’s deviousness in evading a convention that the US government signed has produced another suspicion: did the new Ebola strain escape, perhaps via some lab mishap that infected lab workers, or was the strain deliberately released in order to test it out and see if it works?

The only intelligent and responsible policy is to stop all commercial flights to and from Ebola-affected areas. Health worker volunteers should be transported by military aircraft and should be required to undergo the necessary quarantine before being transported back to the US.

Why does the White House oppose the only responsible and intelligent policy at hand, and why is Congress silent on the issue?

The fact that a presumably competent administration would show such resistance to the only sane policy available fosters suspicions that the government or some other group intends to use Ebola as a pretext to declare martial law and herd the population or undesirable parts of it into the FEMA camps that Halliburton was paid to construct (without the public ever being told the reason for the camps).

It is certainly strange that a government involved in long-term wars in the Middle East, the purpose of which is unclear to the public, and in fomenting conflict with both Russia and China, two countries armed with nuclear weapons, would so recklessly create more suspicions among the public with respect to its motives, intentions, and competence.

Democracy requires that the public trust its government. Yet Washington does everything possible to destroy this trust and to present a picture of a dysfunctional government with hidden and undeclared agendas.