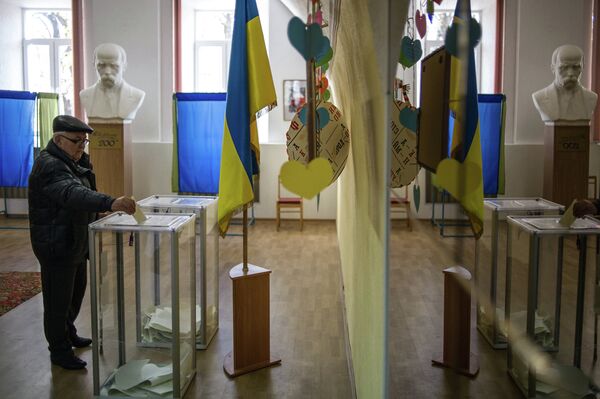 Ukraine’s Central Election Commission said Monday that voter turnout in the country’s parliamentary elections stands at 52.42 percent after compiling data from all 198 districts.

The largest voter turnout was noted in the Lviv region with 70 percent turnout and the regions showing the lowest turnout were in the Donetsk (32.4 percent) and Lugansk (32.87 percent) regions. Voter turnout in the country’s capital of Kiev stands at 55.86 percent.

Earlier on Monday the Ukrainian Civil Network Opora said that according to its results, the turnout in the elections to the Verkhovna Rada throughout Ukraine was 51.2 percent with the highest results of 59.7 percent in the west of the country, including the cities of Lviv and Ivano-Frankivsk, and the lowest turnout of 41.1 in the eastern Ukraine.

Foreign polling stations showed a remarkably low turnout with only 333 or 5 percent of 6573 voters registered at Washington DC polling station coming to cast their vote in the Ukrainian parliamentary election, according to the head of the election committee at the Ukrainian Embassy.

Early parliamentary elections were held in Ukraine on Sunday. Ukrainians went to the polls to vote in 423 members of parliament — 225 of them from party lists and 198 in single-candidate constituencies. The electoral threshold is set at five percent.