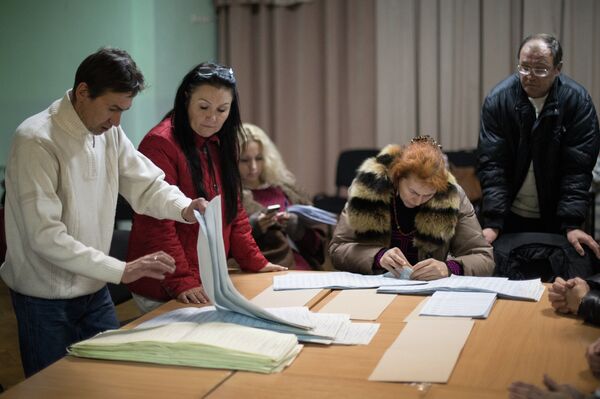 The Petro Poroshenko's Bloc is maintaining a narrow lead in Ukraine's parliamentary elections with 21.85 percent of the votes, as 10.15 percent of the ballots have been counted, the Central Election Commission said Monday.

KIEV, October 27 (RIA Novosti) - The Petro Poroshenko's Bloc is maintaining a narrow lead in Ukraine's parliamentary elections getting 21.85 percent of the votes, as 10.15 percent of the ballots have now been counted, the Central Election Commission (CEC) said Monday.

According to the CEC, Prime Minister Yatsenyuk's People's Front is second with 21.64 percent of the votes.

The Samopomich (Self-Help) party headed by mayor of Lviv Andriy Sadovy is now third with 9.35 percent of the votes, closely followed by the Opposition Bloc with 9.17 percent.

Early parliamentary elections were held in Ukraine on Sunday. Ukrainians went to the polls to vote in 423 members of parliament - 225 of them from party lists and 198 in single-candidate constituencies. The electoral threshold is set at five percent.

According to the Ukrainian Civil Network Opora, the turnout in the elections to the Verkhovna Rada throughout Ukraine was 51.2 percent with the highest results of 59.7 percent in the West of the country, including the cities of Lviv and Ivano-Frankivsk, and the lowest turnout of 41.1 in the eastern Ukraine.