Time Running out for Election Monitors, Registering Ahead of Ukrainian Parliament Polls 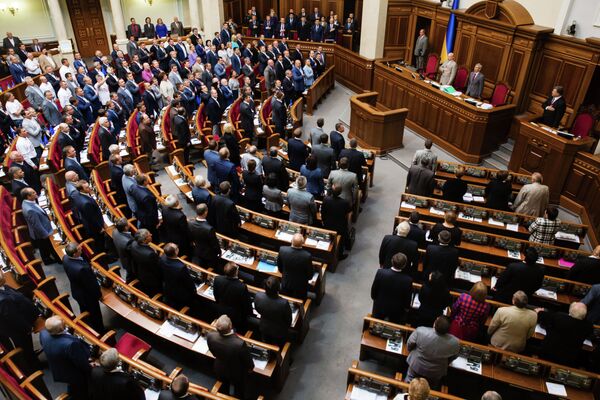 © RIA Novosti . Mikhail Palinchak
/
Go to the photo bank
Subscribe
Monday will be the final day for those, going to monitor the upcoming parliamentary election in Ukraine to register with the country's Central Election Commission.

MOSCOW, October 20 (RIA Novosti) - Monday will be the final day for those, going to monitor the upcoming parliamentary election in Ukraine to register with the country's Central Election Commission.

More than 1,800 observers have been registered so far, with 1,589 representing non-government organizations and 238 dispatched by foreign governments.

A snap election to the Ukrainian unicameral parliament, known as the Verkhovna Rada, is scheduled for October 26. Ukrainians will go to the polls to vote in 438 MPs (50% under party lists and 50% under constituencies).

Observers from the OSCE security organization and its Office for Democratic Institutions and Human Rights (335); the European Network of Election Monitoring Organizations, or ENEMO (242); the Organization for Democracy and Economic Development, or GUAM (22); and the European Parliament (27) will be monitoring the election.

Russia and other countries from the post-Soviet Commonwealth of Independent States (CIS) have not received invitations from the Central Election Commission and will most likely stay out – as will the United Nations.

The UN press office told RIA Novosti on Thursday it was not going to send observers to Ukraine, because it had not been officially invited by Kiev.

"For the United Nations to take part in election monitoring, there would need to be an official request from a Member State, as well as a mandate from the General Assembly or the Security Council. In the case of Ukraine, we have not received such a request," the organization said.

A snap parliamentary election in Ukraine was announced after President Petro Poroshenko in August signed an executive order, dissolving the parliament.

Opinion polls say the president's party, called Petro Poroshenko Bloc, is currently in the lead. If his party wins the majority of 226 seats it will be able to form the government. Electoral blocks of political parties have been banned from taking part in the elections. The election threshold is at 5 percent.

Other strong contenders, according to surveys, are Radical Party of Oleh Lyashko, Yulia Tymoshenko's Batkivshchyna, Civil Position, People's Front and Strong Ukraine, while the Communist Party of Ukraine, right-wing Svoboda and far-right Right Sector are likely to lose out on seats.

Authorities in Ukraine's breakaway regions of Donetsk and Luhansk said they will not go to polls on October 26 or on December 7, which is a separate election day stipulated by President Poroshenko's law that also granted them a special status. Instead, the regions are set to vote on November 2.