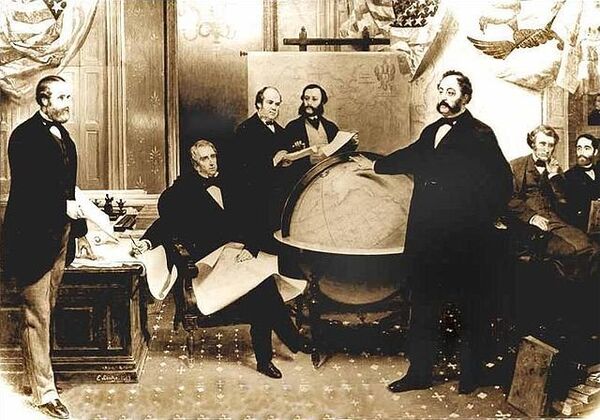 On this day in 1867, Russian colonies in North America covering an area of 1,519 thousand square kilometers (586,5 square miles) were ceded to the United States under an agreement signed on March 30.

The ceremony of official transfer on October 18, 1867 was held in Novoarkhangelsk (now Sitka), the capital of the Russian colonies in North America, and included an artillery salute and a joint military parade, following which the Russian flag was lowered and the US flag was raised.

In Alaska, the official holiday, known as Seward’s Day, is celebrated on March 30, the day the transfer agreement was signed. The holiday is observed on the last Monday of March.

The initiative to sell Alaska was first put forward by the Governor General of East Siberia Nikolai Muravyov-Amursky on the eve of the Crimean War of 1853-1856. In the spring of 1853, he submitted a secret note to Emperor Nikolai I, in which he laid out his views on the need to strengthen Russia’s positions in the Far East and the importance of close ties with the United States. He argued that the United States would try to claim Alaska sooner or later, and Russia would not be able to defend these remote colonies in North America. At the time, the Russian population in Alaska totaled about 600 to 800 people. In addition, the region was populated by close to 1,900 creoles and about 5,000 Aleutians. Alaska was also home to about 40,000 Tlingit Indians, who refused to consider themselves Russian subjects. The Russian population in Alaska was clearly insufficient for the development of a territory covering over 1.5 million square kilometers and geographically remote and detached from mainland Russia.

Muravyov’s note received a positive response from the government in St. Petersburg. His suggestions on strengthening Russia’s positions in the Amur region and on the Island of Sakhalin were thoroughly reviewed by General-Admiral Grand Duke Konstantin and members of the management board of the Russian-American Company.

A major result of this work was an order by the Emperor dated April 23, 1853, authorizing the Russian-American Company to “occupy the Island of Sakhalin under the same conditions as it occupied other lands, listed in the privileges it has been granted, to preclude foreign settlements on the island.”

The main proponent of selling Alaska was Grand Duke Konstantin, the younger brother of Emperor Alexander II. The financial situation in the empire was deteriorating despite ongoing reforms, and the country needed foreign investment.

The negotiations to purchase Alaska from Russia began under President Andrew Johnson (1808-1875) at the urging of Secretary of State William H. Seward. The decision to sell Alaska was made on December 28, 1866 at a special meeting in the Main Hall of the Russian Ministry of Foreign Affairs. The meeting was attended by Emperor Alexander II, Grand Duke Konstantin, Foreign Minister Alexander Gorchakov, Finance Minister Mikhail Reytern, Naval Minister Nikolai Krabbe and Russian Envoy in Washington Eduard Stoeckl. The agreement to sell Alaska to the United States for $7.2 million (11 million roubles) was signed on March 30, 1867.

On August 1, 1868, Russian Envoy in Washington Baron Eduard Stoeckl received a check for $7.2 million at the US Treasury. This financial operation sealed the largest sale of territory in world history.

Under the treaty, Russia ceded to the United States the following territories in North America and the Pacific: the entire Alaskan Peninsula (with a border running along the 141st meridian west), the 10-mile coastal strip south of Alaska along the West coast of British Columbia; the Alexander Archipelago; the Aleutian Islands with Attu Island; the Near Islands, the Rat Islands, the Fox Islands, the Andreanof Islands, the Shumagin Islands, the islands of Trinity, Umnak, Unimak, Kodiak, Chirikof, Afognak and a number of smaller islands; the islands in the Bering Sea – St. Lawrence, St. Matthew, and Nunivak; and the Pribilof Islands. Along with the territories, Russia transferred to the United States all immovable property, the colonial archives and the official and historic documents relating to the transferred territories.

Most experts believe that the agreement to sell Alaska was mutually beneficial, reflecting the geopolitical ambitions of the United States and Russia’s calculated decision to focus on the development of the Amur region and Primorye, which became part of Russia in 1860.

In the United States, the decision to purchase the vast territory wasn’t very popular. Opponents of the deal called Alaska a reservation of polar bears. The US Senate approved the agreement by a majority of only one vote. However, following the discovery of large deposits of gold and other mineral resources, the deal was recognized as the main achievement of Andrew Johnson’s administration.

The name Alaska was given to the region when the agreement was passing the approval procedure in the US Senate. Speaking in support of purchasing the new territories, Senator Charles Sumner called the region Alaska, which means Great Land in the language of the indigenous population of the Aleutian Islands.