Alice Slater: “China Is the Only Country That Promised Not To Use Nuclear Weapons First” 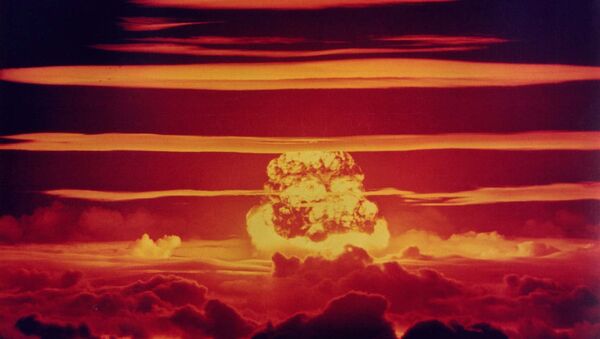 © United States Department of Energy
Subscribe
International
India
Africa
Alice Slater, New York Director of the Nuclear Age Peace Foundation, told Rossiya Segodnya about the current situation with the nuclear weapons in China. 50 years ago China detonated its first nuclear test, nearly 20 years after the US dropped their bombs on Hiroshima and Nagasaki. There are nine countries that have nuclear weapons today: the US, Russia, UK, France, and China, who signed the Non-Proliferation treaty (NPT) in 1970.

Alice Slater, New York Director of the Nuclear Age Peace Foundation, told Rossiya Segodnya about the current situation with the nuclear weapons in China. 50 years ago China detonated its first nuclear test, nearly 20 years after the US dropped their bombs on Hiroshima and Nagasaki. There are nine countries that have nuclear weapons today: the US,  Russia, UK, France,  and China, who signed the Non-Proliferation treaty (NPT) in 1970.

China's first nuclear test took place 50 years ago. How would you assess the current situation with the nuclear weapons in the country? Does it represent any potential danger?

Alice Slater: Every country’s nuclear bombs represent a danger to the world. It is estimated that there are 16,300 nuclear bombs on the planet with all but a thousand of them in the US and Russia. China is estimated to have about 250 of them. China is the only country among the NPT signers who has promised not to be the first to use them. But essentially, just the possession of a nuclear arsenal is a form of use. When a bank robber walks into a bank and points a gun at people, even if the gun is never shot, it is still being used by the robber to bully and intimidate. That is what the possession of nuclear weapons means, by any country possessing, them, even China with its modest arsenal.

Alice Slater: It is an illusion to think that there are any security benefits to possessing nuclear weapons. We are learning now of the  many near-accidents with airplane crashes carrying nuclear weapons, misplaced missiles flown unknown to distant bases carrying unaccounted nuclear weapons, missing and lost nuclear weapons in the US. Undoubtedly similar situations exist in Russia. Perhaps not in China since they never built the tens of thousands of nuclear weapons that the US and Russia competed with to show who was stronger, when it actually made us weaker and more vulnerable to accidents, hazardous waste issues, not to mention possible miscalculations. We were very lucky not to have experienced an accidental nuclear war.  While laboring under the illusion that nuclear weapons provide security, it isn’t so for the major nuclear powers. Of course the fact that Saddam Hussein wound up in a hole in the ground and Muammar Gaddaffi in a sewer pipe after they gave up or were forced to turn over their nuclear technology, may give cause to isolated nations like North Korea to cling to their nuclear “deterrent”.

Do you think it is important to continue the development of nuclear weapons or should the countries work on its elimination?

Alice Slater: With the planet facing catastrophic climate change, droughts, hurricanes, tsunamis, forest fires, from the excessive carbon emissions from the industrial age, we can little afford to spend our national treasures of money and intellectual power on nuclear technology - both for weapons and power. The nuclear waste lasts 250,000 years and we don’t know how to safely isolate it from the environment for that inordinate length of time.  It is now reported that the US is contemplating expenditures of one trillion dollars over 30 years on its nuclear arsenal, laboratories, and delivery systems, with $300 billion budget for the next ten years. Russia and China, as well as India and Pakistan, have also been announcing new expenditures on this destructive and useless technology. Perhaps Asia can lead the way towards nuclear disarmament. The West is now caught up in a new cold war, having failed to contain NATO as promised to Gorbachev when the wall came down in Berlin and having expanded the missile program into eastern Europe after the US walked out of its Anti-Ballistic Missile Treaty with Russia.

Given the current political situation in the world, is there a risk that any of Nuclear-Weapon States will use the weapons against another country? What are your estimates in this regard? What country could it be?

Alice Slater: I don’t think any country would deliberately use nuclear weapons first, but we can’t be lucky forever on accidental launch or misjudgments. The world remembers Russia’s Colonel Petrov, in the Soviet bunker who disobeyed orders when a radar blip indicated a nuclear attack from the US and it was only a Norwegian weather satellite that had gone off course. We could have had a nuclear holocaust had he not done the right thing. We also came very close to miscalculating the presence of nuclear weapons during the Cuban missile crisis. We shouldn’t continue to push our luck! Some wise country, or group of countries should take the lead and start the talks for elimination under monitoring, verification and a tight timeline.

Do you think any nuclear threat from Iran exists and what is your personal view on Iran’s nuclear program? Is it peaceful?

Alice Slater: Iran is no more of a threat than other countries. Once you have the enrichment technology, you have the capacity to make the bomb, just as North Korea did. Every nuclear power plant is a bomb factory and the sooner we phase out nuclear power and rely on the abundant, clean, free energy of the sun, wind, water, geothermal we will all be safer, less poor, and may actually have some peace on earth. Over 400,000 people marched in NYC this month to make the links between poverty, war, and climate catastrophe. If Russia could put a man on the moon, surely it can work to end destructive technology and lead the way to a 21st century free of nuclear and fossil fuel.

Alice Slater: Any country with a nuclear reactor has the capacity to develop a bomb.  Brazil, Argentina, South Africa, were on the way to making bombs and changed course. Japan has the capacity and every now and then its generals say it should use its tons to enriched plutonium to make bombs.   Brazil is enriching plutonium. We are planning to sell nuclear technology to Saudi Arabia but they won’t give us assurances that they won’t enrich uranium.

How can you describe relations between China and the United States in the nuclear weapons development sphere?

Alice Slater: I don’t know if the US and China even discuss nuclear weapons. The two main players are the US and Russia. Right now there is a push from the military industrial complex and the unregulated corporations to make an enemy of Russia over Ukraine. We should be clearing up the events that occurred in the Ukraine as the corporate dominated media in the US doesn’t report events accurately and Russia is being blamed by our government and press without evidence. We still don’t know what happened. Some members of Civil Society called for an investigation, but nothing has happened. I think Russia should bring this up in the Security Council and in the First Committee of the UN that is meeting this week and next week.   Let’s get all the facts out on the table.

Finally, Russia and China should come to the meeting in Vienna on the humanitarian consequences of nuclear weapons this December.  India and Pakistan came to the last two in Mexico and Oslo which the p-5 boycotted. This is the time for China and Russia to join the Asian nuclear weapons states and call for a treaty to ban the bomb, just as we’ve banned chemical and biological weapons. It would give the Western states pause, and empower civil society to press more effectively for nuclear disarmament in the US, UK, and France, as well as in the five European states that are part of NATO’s nuclear sharing - Italy, Belgium, Turkey, Netherlands and Spain.