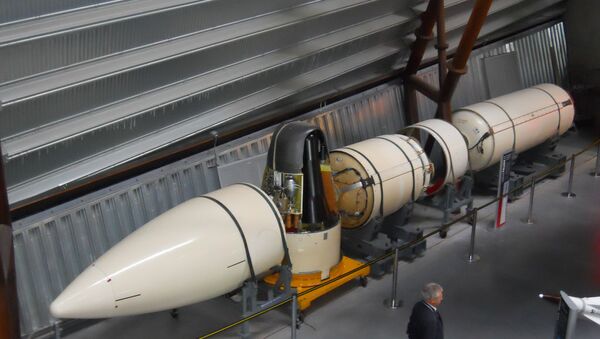 All countries in the world should work together to eliminate nuclear weapons, Dr. Li Bin, a senior associate working jointly in the Nuclear Policy Program and Asia Program at the Carnegie Endowment for International Peace, told RIA Novosti Thursday.

"It is important for all countries in the world to work on the elimination of nuclear weapons," Dr. Li Bin said.

He acknowledged that the process toward nuclear zero could be implemented step by step.

The atomic bomb was detonated on October 16, 1964 and on the same day the Chinese Government said that China would never be the first to use nuclear weapons.

Commenting on China's current nuclear weapon developments, Dr. Li Bin said that the country "has a small nuclear force at low alert status in peacetime" and is "working to raise the safety and survivability of its nuclear weapons."

The expert noted that there is no general conclusion that nuclear weapons are beneficial to all countries in the world.

"Nuclear weapons may harm the security of a country if it does not have good control on its nuclear capability or it is very vulnerable to conventional attack," Dr. Li Bin stressed.

The Carnegie senior associate added, however, that "China's nuclear weapons help its national security by countering potential nuclear coercion against it."

Answering the question about the nature of Iran's nuclear program, Dr. Li Bin said that in his view "some elements of the current Iranian nuclear program would help Iran significantly gain its latent nuclear weapon capability no matter its intention is peaceful or military."

"We should seek alternatives for the Iranian nuclear program so it cannot develop latent nuclear weapon capability when it makes progress in peaceful use of nuclear energy," the expert stated, warning that the greatest danger of using nuclear weapons may come from unauthorized or accidental launch of nuclear weapons that are at "hair-trigger alert."

Speaking about cooperation between China and Russia in the nuclear field, Dr. Li Bin claimed that the two countries today "have some cooperation on conventional military systems," not on nuclear weapons.

The expert recalled that China and Russia have a bilateral "no-first-use" agreement.

In all, China has conducted 47 nuclear tests, including 23 atmospheric tests. Three nuclear devices were suspended from towers, and two of them were detonated 102 meters above the ground. All nuclear tests were conducted at the Lop Nur Nuclear Testing Site in northwestern China.

On August 1, 1996, China announced a moratorium on all nuclear testing and later signed the Comprehensive Nuclear Test Ban Treaty (CTBT).

In 2007, the Chinese Government turned its Lop Nur Nuclear Testing Site into a tourist site.