Putin: No Energy Crisis in Europe on Russia's Behalf 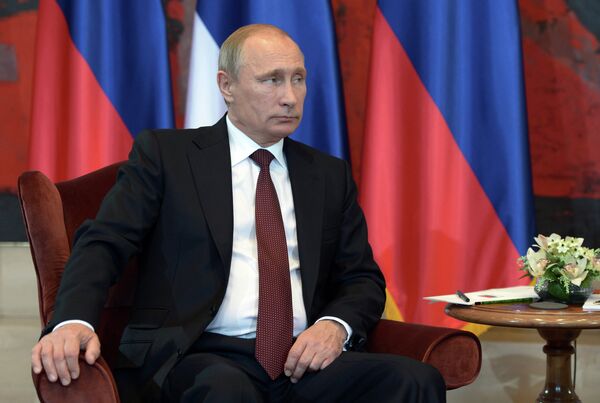 © RIA Novosti . Alexei Nikolsky
/
Go to the photo bank
Subscribe
President Vladimir Putin on Thursday reassured European partners that Russia would do everything possible to prevent any interruption of Russian natural gas deliveries to Europe.

BELGRADE, October 16 (RIA Novosti) - President Vladimir Putin on Thursday reassured European partners that Russia would do everything possible to prevent any interruption of Russian natural gas deliveries to Europe.

"We would't want any crisis to occur during the winter period," Putin told reporters following talks with Prime Minister Aleksandar Vucic in Belgrade.

"Russia has always been a reliable supplier, and we have enough resources to satisfy our own demand and the growing demand of our clients in Europe or Asia," Putin said.

The president added, though, that if Ukraine starts illegally removing gas from the transit pipeline, Russia would have to reduce gas supplies to Europe.

“We will equally reduce the amount of supply as it happened in 2008. I really hope that it would not come to that,” Putin said.

Earlier in the day, Ukrainian Prime Minister Arseniy Yatsenyuk said that Kiev will not guarantee uninterrupted transit of Russian gas to Europe via its territory unless it signs a gas transit contract with the EU partners.

In the past months, Ukraine, a major transit nation for Europe-bound Russian gas, has been pushing for an agreement that would enable European companies to buy Russian gas as soon as it crosses into the territory of Ukraine.

Moscow and Kiev are still unable to agree on the price of Russian gas for Ukraine.