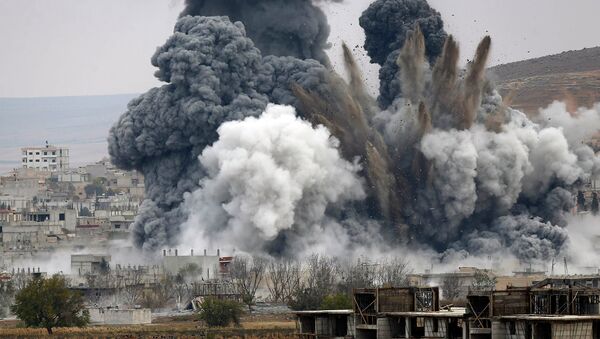 Andrew Korybko
All materials
The current question regarding the Syrian War is whether or not Turkey will enter the country to protect Kobani from ISIL. The majority-Kurdish inhabited town on the Turkish border is currently under siege, with the Turks themselves warning that it could soon fall to the terrorists.

MOSCOW, October 14 (RIA Novosti) — The current question regarding the Syrian War is whether or not Turkey will enter the country to protect Kobani from ISIL. The majority-Kurdish inhabited town on the Turkish border is currently under siege, with the Turks themselves warning that it could soon fall to the terrorists. Of course, any Turkish involvement would not be selfless, as Ankara itself said that a precondition for its involvement is an outside-supported regime change in Damascus. Nonetheless, it is fitting to ponder why Turkey hasn’t intervened already (it has unconventionally been supporting over 106 armed groups for over three years), both to ‘protect Kobani’ and to overthrow the democratically-elected government of Syria. Under further examination, the issue boils solely down to the Kurdish Question and Washington’s manipulation of this issue to pressure Turkey.

Turkey’s Importance to the International Coalition

The anti-ISIL coalition, better termed the Syrian Regime Change Coalition (RCC), sorely needs Turkish conventional involvement. It understands that airstrikes would not be enough to defeat the Syrian Arab Army (SAA) for when the anti-ISIL mission officially shifts to regime change, and thus, it knows that a ground component is necessary. Of course, the Kurdish fighters can fulfill valuable roles as proxies in the north and northeast, but may refuse to take the war past their traditional domain. Even if they do, they will stand no chance against the SAA and are incapable of occupying territory in the manner that the US anticipates. A professional and highly-trained conventional army is needed to ‘finish the job’, and since the US has ruled out deploying its own combat troops (but importantly, not its special forces), it needs those of its regional allies.

Jordan and Saudi Arabia have not completed the training of their thousands of Syrian ‘rebels’, and such a process could possibly last a long time. Although these rear guard forces could potentially be of huge assistance to the RCC, right now they are not capable of doing much, and prematurely sending them into Syria would be disastrous. They could, however, be valuable in augmenting a Turkish invasion from the north by exploiting Damascus’ strategic distraction and launching a swift offensive on the capital. Until then, however, they are merely ‘bench warmers’. This is where Turkey comes in, as it is needed by the US to launch a conventional invasion of northern Syria in order that the Jordanian- and Saudi-trained insurgents may make a run on the capital. This is expected to coincide with a rapid Turkish push south, thereby presenting a pincer movement from which the SAA would be hard-pressed to escape.

With that being said, Turkey’s previous dillydallying must be explained and put into context. Ankara, having been the most insistent government pushing for regime change in Damascus, surprisingly did not immediately sign up for action when the RCC began bombing ISIL targets in Syria. Although it is not possible to know exactly what Erdogan was thinking, it is possible to draw a few inferences based on Turkey’s recent history.

During the 2003 Iraq War, Turkey pulled a similar stunt. It pretended that it was against the war, but after it began, it soon thereafter allowed its territory to be used by US forces. Most likely, what had happened was that the country’s leadership was using ‘strategic patience’ in pressuring the US for some kind of deal, in that case, likely permission to intervene in Northern Iraq at will to squash Kurdistan Workers’ Party (PKK) cells there in the future (which it did). Likewise, under the current situation, Ankara was likely once more testing America’s ‘strategic patience’ in trying to secure for itself another kind of deal, which, given its history, probably also involves the Kurds.

Turkey obviously had been aware of Israel’s leadership voicing statements supporting Kurdistan’s independence, and it should already see the strategic use that this would be to the US as well. With the writing on the wall, Ankara may have tried to play ‘hard to get’ for the RCC, knowing full well the integral role it occupies in such an arrangement, in order to get concessions from the US and its allies on the issue of a post-war independent Kurdistan. No matter what happened or was discussed, this was not adequate for the Turks, as they waited until early October to authorize (but not yet initiate) a conventional military involvement in Syria, despite a heavy Western media and Kurdish NGO and civil society campaign to pressure and guilt them into doing so for the ‘sake of Kobani’. Apparently, the Kurdish Question is still alive and kicking in the minds of Turkey’s leadership, and they are hesitant to enable it any further than they already unintentionally have.

The elephant in the room for Turkey is the future status of Kurdistan in the Mideast, specifically about whether or not an independent state with revanchist ambitions can arise in Northern Iraq. In general, Kurds are estimated to compose at least 20% of Turkey’s overall population, and have been agitating for years for increased autonomy and language rights in their home regions in the southeast of the country. Turkey had been fighting the PKK, the vanguard of the Kurdish movement, since 1984, even going as far as to designate the group as a terrorist organization. Although currently in peace talks with one another, the entire process is threatened by the events in Kobani, with some PKK leaders saying that they will pull out if Turkey remains apathetic to what they view as an oncoming genocide. This would be catastrophic for Turkish domestic stability and would certainly not be welcomed by the country’s political leadership, especially with a possible conventional engagement in Syria looming on the horizon.

The Kurds, more than any other political force in the world, have been the most active and vocal in pressing Turkey to wage war in Syria. They have agitated across the country in protests over the past week, with over 20 of them killed in subsequent clashes with police. Outside of Turkey, Kurds took to occupying part of the Dutch Parliament and organizing massive protests in Germany, all to focus international pressure on Ankara and guilt it for its inaction in Kobani (which as was discussed, is not intended to be limited just to that city).

On a more violent level, the PKK and other militant Kurds want to cross over the border to help their brethren in Kobani, but are being stopped by Turkish security forces. This has led to clashes, protests, and the use of tear gas to disperse the angry mobs trying to storm into Syria. Turkey is afraid that its Kurdish nationals will then return to the country to enhance the fighting capability of the PKK, especially if peace talks break down, thus potentially threatening the stability of the Erdogan-Davutoglu power tandem and the country’s territorial integrity.

Additionally, supposing Turkey accedes and moves into Kobani, this would bring with it the de-facto absorption of hundreds of militant Kurds, all within striking distance of the Turkish military if tensions with the PKK reach the breaking point. If Turkey advances south towards Damascus and overextends itself, the Kurds could be a stay-behind force that can enact serious military pressure to force their demands. Either way, Turkey looks, it is gorged between the two horns of a dilemma, and they both deal with Kurdistan.

Sinisterly, Turkish strategic planners, keeping in mind the utility that an independent Kurdistan could have for US geopolitical goals in the Mideast, may even suspect their ‘partners’ of continuing to exploit this factor to pressure Turkish compliance on other international issues. After all, the author already predicted on 14 September that the US could play the ‘Kurdish Card’ in pushing Turkey to invade Syria, and thus far, the Kurds have been the ones applying the most forceful pressure. It would not be unexpected for this to continue far into the future now that it has already been used in practice.

This strategy is double-handed, however, as it has done more to harm the US-Turkish relations than anything else. Washington underestimated the Turks’ sensitivity to the Kurdish Question, feeling that they could use internal vulnerabilities to pressure their ally just as they do their enemies. Erdogan, mindful of his long-term political ambitions, sees this issue as more of a threat to him and the country than the Gezi Park protests and related scandals. By now, he should realize through the US’ implicit support of the Kurds and their cause that Washington is not Ankara’s true ally, and that it was Turkey helping the US in Syria over the past three years and not the reverse. This has strengthened Turkish political mistrust of US motives, since it is now quite apparent that the two have very different visions of a post-war Syria.

Thus, one can now better understand the conundrum that Turkey is faced with. It had previously wanted to intervene in Syria at its own pace and in promotion of its post-war vision for the country, seeking to maximize as many US rewards/concessions as possible. However, its dillydallying has led to America’s impatience, which then began using the Kurdish Card to pressure Turkey, thereby opening up a whole other can of worms. Now, Turkey is faced with a massive conundrum:

* It can intervene in Syria under US pressure to pursue uncertain goals (the US and the RCC never gave their official commitment to support regime change if Turkey invades, and none has discounted recognizing an independent Kurdistan) and risk the unintended consequences;

* Or it can stay out, increase internal tensions with the Kurds and risk America’s behind-the-scenes wrath, and possibly endanger the entire Turkish political structure.

Turkey has certainly found itself in a bind through its dealings with the US. By acting independently and trying to gain guarantees in exchange for military involvement, it provoked the strategic wrath of the US, which then reignited the Kurdish issue to pressure Turkey’s leadership. No matter what choice Turkey makes, its decision is motivated by the Kurdish pressure that the US placed upon its shoulders. This Pandora’s Box of Kurdish nationalism has exploded and now endangers not only Turkey’s government and potentially its borders, but perhaps even the entire underpinnings of the US-Turkish alliance.