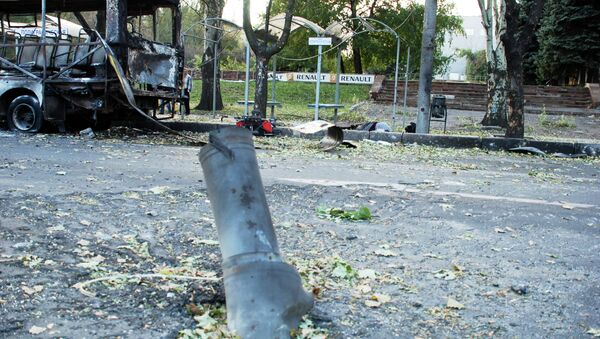 © Sputnik / Gennady Dubovoy
/
Go to the photo bank
Subscribe
At least three civilians have lost their lives in the Donetsk region on the first day of the so-called “silence regime”, a spokesperson of the Donetsk Regional Trauma Hospital said Saturday.

DONETSK, October 11 (RIA Novosti) - At least three civilians have lost their lives in the Donetsk region on the first day of the so-called “silence regime”, a spokesperson of the Donetsk Regional Trauma Hospital said Saturday.

“Today, an artillery strike hit the Kuybyshev region near the 21st hospital. According to preliminary data, at least three people were killed and three were sent to us,” he said. Two of the injured "are in critical condition, one is in intensive care.”

Earlier on Saturday, Prime Minister of the self-proclaimed Donetsk People's Republic Alexander Zakharchenko announced that a "silence regime" in the region would go into effect immediately. He added that the pullout of artillery and military hardware is to begin after the "silence regime" holds for five days.

An armed conflict in Ukraine's southeast began in April when Kiev launched a military operation against independence supporters in the region. Almost 3,700 people have been killed and over 8,800 have been wounded since the start of the operation, according to a UN report published on Friday.

On September 5, the two conflicting sides agreed on a ceasefire during a meeting in Minsk of the trilateral Contact Group on Ukraine. Both sides have subsequently accused each other of violating the agreement.