Elections in Donetsk, Luhansk In Line With Minsk Agreements: Moscow 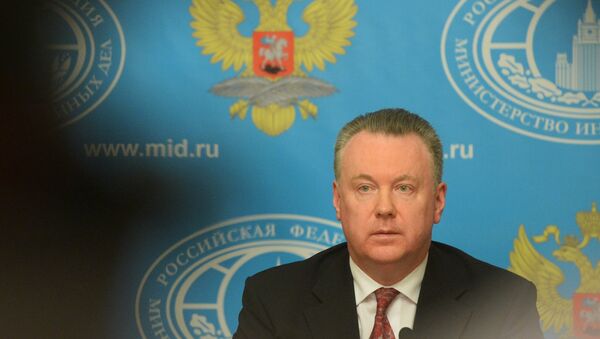 The elections in the self-proclaimed republics of Donetsk and Luhansk in eastern Ukraine are in line with the Minsk agreements and should be encouraged and facilitated, Russian Foreign Ministry spokesman Alexander Lukashevich said Thursday.

MOSCOW, October 9 (RIA Novosti) – The elections in the self-proclaimed republics of Donetsk and Luhansk in eastern Ukraine are in line with the Minsk agreements and should be encouraged and facilitated, Russian Foreign Ministry spokesman Alexander Lukashevich said Thursday.

"They [the Kiev government] should implement what was agreed," the spokesman said.

The comments made by Lukashevich come in response to the statement by Ukrainian Foreign Minister Pavlo Klimkin, who urged Moscow to "discourage" the Donetsk and Luhansk People's Republics authorities from holding election.

"Mr. Klimkin should take a look at the Minsk protocol signed on September 5… signed on behalf of Ukraine… and I am quoting the ninth paragraph: to ensure early local election in accordance with Ukrainian law ... in parts of the Donetsk and Luhansk regions," the spokesman added.

"[It is necessary] not to discourage people, but to create the conditions for the elections to be held. And it comes within the framework of the nationwide dialogue, which should guarantee the pace of national reconciliation in Ukraine," Lukashevich stressed.

On September 5, the trilateral Contact Group consisting of representatives from Russia, Ukraine, the self-proclaimed Donetsk and Luhansk people's republics and the Organization for Security and Co-operation in Europe (OSCE) met in the Belarusian capital, Minsk to discuss the peaceful settlement of the Ukrainian conflict. The meeting resulted in a series of agreements between the Ukrainian government and the self-proclaimed people's republics.

The Minsk protocol signed by the Contact group the same day envisages a ceasefire and suggests, among other things, that Ukraine should adopt a law on granting special status to the Donetsk and Luhansk regions and ensuring early elections of the heads of the self-proclaimed republics.

Both regions initially set elections of regional leaders and legislative bodies for November 2, while the rest of Ukraine is holding a snap parliamentary election to the Verkhovna Rada on October 26. However, earlier this week, local officials announced that the authorities in the republics were mulling the possibility of postponing the upcoming elections until November 9