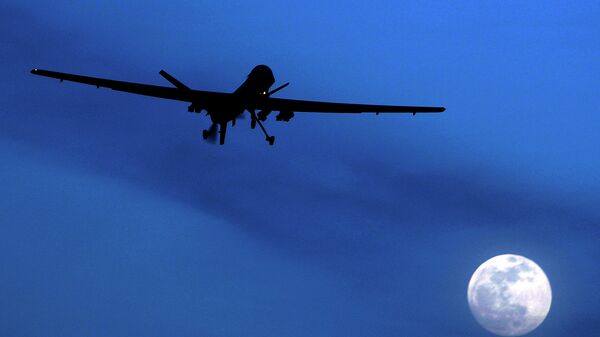 At first, unmanned aerial vehicles (UAVs), also known as drones, were primarily used for military purposes due to few benefits over their “piloted” counterparts: drones are smaller and cheaper to produce than military aircrafts, they can fly longer hours than piloted planes.

MOSCOW, October 9 (RIA Novosti) – At first, unmanned aerial vehicles (UAVs), also known as drones, were primarily used for military purposes due to few benefits over their “piloted” counterparts: drones are smaller and cheaper to produce than military aircrafts, they can fly longer hours than piloted planes, and most importantly, there is no danger to the flight crew since drones are flown remotely.

Nowadays, drones have become mostly associated with deadly killings and military surveillance operations. The US Central Intelligence Agency (CIA) started flying drones over Afghanistan in 2000. First, drones were used as support vehicles during military operations. However, starting the early 2002, the CIA started to use drones in targeted killings, according to The Nation, weekly journal. UAVs have quickly become the subject of contested political debates.

People have been flirting with the idea of using UAVs as far back as 1916, according to the Guardian, when military scientists conceived an unmanned monoplane, made out of wood and tin, loaded with explosives. But it was not until the end of the World War II, when military scientists had begun to seriously contemplate the idea of using drones in warfare. There are records of a primitive unmanned flying aircraft used during the Vietnam War, said Understanding Empire, a website dedicated to history of drones.

However, not all drones are used for military purposes. Forward-thinking entrepreneurs of all stripes have realized a huge potential that drones might have in future. There is an increasing trend of using UAVs for a variety of civil and commercial purposes, from scouting out disaster areas to delivering parcels.

UAVs have been used for shooting videos and taking aerial footage. Drones can provide a safe alternative for their piloted counterparts, being cheaper and more manoeuvrable. “Just throw them in the back of a truck and drive out there. You can fly through bridges, flying very close”, said Tom Hallman, an aerial cinematographer, as quoted by the Washington Post.

Hollywood blockbusters are becoming increasingly reliant on the use of drones to shoot some of their breath-taking scenes. Using drones, movie directors can pull off riskier and more acrobatic shots that would be otherwise impossible to shoot using traditional film making techniques.

A wide range of aerial surveillance tasks can be used via UAVs. Inspection of agricultural crops, livestock and wildlife monitoring, wildfire mapping, patrol of pipelines and oil spills, among other things, are now done with the help of drones, reports PC Magazine.

Drones can be very effective in wildlife monitoring, in particular, as the unmanned vehicles can reach remote and inaccessible areas and study critically endangered animal species. A team of scientists used a small drone to study the lives of Orangutans in Sumatra; the drone using thermal imaging was able to take aerial pictures of the apes, found high in trees, without spooking the animals, the Scientific American reported.

Farmers are eager to put drones to commercial use as well. UAVs could fly over their fields and take photos and videos, which can later be analyzed to determine health of their crops. Experts believe drones could revolutionize the agricultural industry.

“I think it’s going to change agriculture as we know it in North America. It’s definitely going to allow producers to become much more efficient,” said Scott Shearer, a professor at Ohio State University and expert in agriculture, as quoted by the Los Angeles Times.

Use of UAVs to promptly deliver goods is another direction drone makers can successfully exploit in the near future. DHL recently said it would use a drone to deliver parcels into a remote place in Juist, Germany. The potential for drone deliveries in remote areas, where infrastructure makes shipping difficult, is a great idea currently being developed, the Wall Street Journal said. Last year, Domino’s Pizza released a video featuring a small drone able to deliver pizza right to customers’ door, CNN reported. Although the project was likely intended as a PR stunt, having received more than 17,000 views within 12 hours, the idea of drone deliveries is definitely attractive.

However, there are few concerns when it comes to a mass use of UAVs. The issue of privacy is one of them. Drones could be secretly recording information while they are flying by our neighborhoods. Safety is another concern. Drones can go out of control and crash land, which could create potential dangers of collision with other objects or humans, reports BBC.