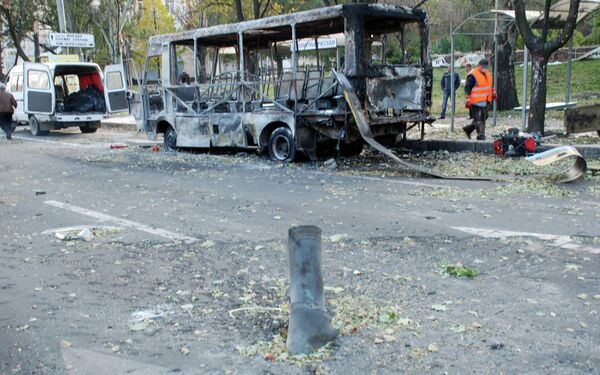 © RIA Novosti . Gennadiy Dubovoy
/
Go to the photo bank
Subscribe
Ukrainian National Security and Defense Council (NSDC) has said that the ceasefire in Donbas is violated, but it is done by uncontrolled military groups.

KIEV, October 5 (RIA Novosti) – Ukrainian National Security and Defense Council (NSDC) has said that the ceasefire in Donbas is violated, but it is done by uncontrolled military groups.

"The terms of the ceasefire agreement are violated by uncontrolled gangs," the press service representative of the NSDC Vladimir Polevoy said at a briefing on Sunday.

Previously, both sides of the conflict in Ukraine, as well as international observers, have repeatedly noted that the ceasefire in the region of Donbas is generally respected. However, independence supporters and Ukrainian security forces have often accused each other of violating the agreement.

Prime Minister of the self-proclaimed People's Republic of Donetsk Alexander Zakharchenko said that Ukrainian law enforcers continue shelling Donetsk and thus prove their insubordination to the central government of the country. "The Ukrainian government does not control their units," Zakharchenko said.

On September 5, the Trilateral Contact Group on the situation in Ukraine met in Minsk. The group consists of representatives from Russia, Ukraine and the Organization for Security and Cooperation in Europe (OSCE). As a result of the meeting, the Kiev authorities and the self-proclaimed people's republics of Luhansk and Donetsk agreed on a ceasefire, which took effect on the day. The sides also agreed to an international monitoring, exchange of prisoners and the opening of humanitarian corridors.

On September 19, a memorandum was drawn up by the group to include nine provisions that would implement the ceasefire agreement between Kiev and independence supports in eastern Ukraine.