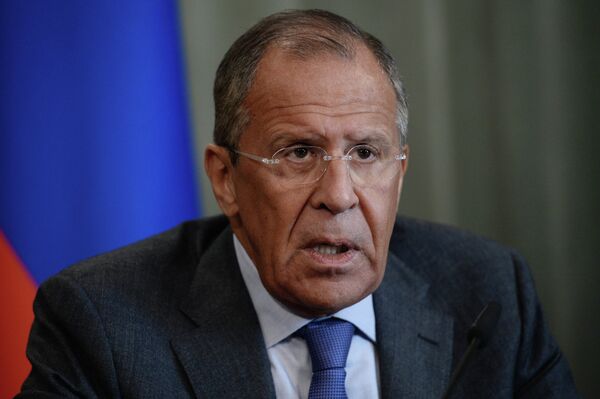 "Tying a dialogue (between Kiev authorities, DPR and LPR), known as the Minsk process has been very seriously disturbed. Preventions came from abroad, including from Washington," Lavrov said in an interview with Rossiya-1 broadcaster and Russia Today TV channel.

Though Lavrov has not named anyone specifically, he stated, "There were people in Washington who have encouraged the position taken, unlike Poroshenko, by Yatsenuk, who makes arrogant statements every time there is some glimmer of hope [in Ukraine], such as: it is necessary to join NATO; you cannot believe the Russians; do not lift sanctions; let's implement more sanctions," Lavrov mentioned.

"He should be, in general, primarily responsible for the economy," said the head of the Russian Foreign Ministry regarding Yatsenyuk's position, adding he found the Ukrainian prime minister's attitude "strange."

On September 5, a trilateral Contact Group consisting of representatives from Russia, Ukraine, the self-proclaimed Donetsk and Luhansk people's republics and the Organization for Security and Co-operation in Europe (OSCE) met in Minsk to discuss the situation in Ukraine. The meeting resulted in a series of agreements between the Ukrainian government and the self-proclaimed people's republics of Luhansk and Donetsk including an "all for all" prisoner exchange, additional humanitarian convoys from Russia to eastern Ukraine, and a ceasefire which began the same day.

On September 19, the Contact Group met again in Minsk and formulated a memorandum outlining nine provisions to regulate the implementation of a ceasefire between Kiev and independence supporters in eastern Ukraine.

The memorandum calls for the implementation of a bilateral ceasefire in addition to other points including the removal of weapons with a caliber of more than 100 millimeters within 15 kilometers (approximately 9 miles) of the contact line on both sides, including residential areas, establishing a 30-kilometer buffer zone. According to the memorandum, all foreign armed groups, military equipment, as well as fighters and mercenaries shall withdraw from the ceasefire zone under the supervision of the OSCE.