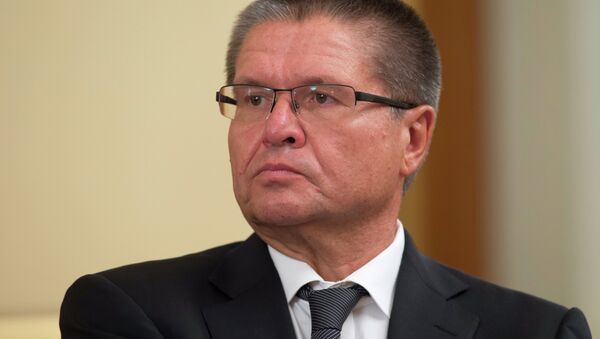 © Sputnik / Sergei Guneev
/
Go to the photo bank
Subscribe
The West is unlikely to impose new sanctions against Russia, but it is doubtful that the existing ones will be lifted anytime soon, Russia's Minister of Economic Development Alexei Ulyukayev said on Saturday.

SOCHI, September 20 (RIA Novosti) - The West is unlikely to impose new sanctions against Russia, but it is doubtful that the existing ones will be lifted anytime soon, Russia's Minister of Economic Development Alexei Ulyukayev said on Saturday.

"I think that there probably will not be new sanctions. But it seems to me that those already imposed are going to be upheld for a long time, regardless of how the situation in Ukraine develops, meaning that even with the Minsk agreements, sanctions will not be canceled and we will have to live with this for quite a while," Ulyukayev said at the International Investment Forum, which is currently taking place in Sochi.

"Though we included in our forecast that the sanctions would be lifted in 2015, I personally think that this is not going to happen," the minister added.

According to Ulyukayev, the main negative effects of Western sanctions on Russian economy will be seen in 2016 and 2017. "The negative effects of the sanctions are mainly postponed... we must prepare ourselves to react, but not by introducing counter-sanctions, which I find to be unproductive, but by supporting those subjected [to the bans]," he said.

The United States, the European Union and a number of their partners have imposed several rounds of sanctions against Russia over its alleged involvement in the Ukrainian crisis, a claim that Moscow has repeatedly denied.

A meeting of the Contact Group on Ukraine held in Minsk on September 5 resulted in a ceasefire agreement between Kiev and independence supporters in eastern Ukraine. Despite the ceasefire, a new round of Western sanctions against Russia came into effect on September 12.

The new restrictions target Russia's largest banks, oil and defense companies, as well as certain individuals. The companies were denied access to the European capital markets, while a number of individuals were subject to entry bans and asset freezes.

Moscow has responded to previous rounds of Western sanctions with a one-year food ban that targets a range of products from the countries that implemented sanctions against Russia.