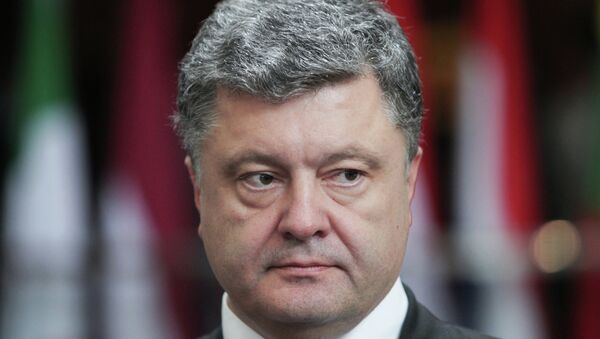 "Poroshenko's win earned him congratulations from President Obama and from Catherine Ashton, the European Union's high representative for foreign affairs and security policy. However, Poroshenko hasn't always been held in such high esteem by the international community, as the Russian daily newspaper Kommersant reported Thursday. In 2006, US officials were describing him as "disgraced" and "deeply unpopular," reported the Washington Post on May 29, 2014.

Gregory Kolyada, a fellow of the Strategic Culture Foundation think tank, notes, that "chocolate mogul" Petro Poroshenko "started his business by laundering the money of Soviet administrators… He had a head start thanks to the criminal connections of his father, [who was] sentenced for large-scale theft in 1986."

Kolyada cites Tatyana Montyan, a Kiev-based lawyer and politician, as saying that in the 1990s both Poroshenko Sr. and his son had been involved in "dirty business" in Transdnistria: "It was horrible back in the 1990s: illegal arms, prostitutes, drugs – all bringing profits to father and son."

The New York Times points out that "like other tycoons throughout the post-Soviet countries, Ukraine's capitalized on the flawed privatization of publicly held assets to amass enormous fortunes," in an article, "Ukraine’s Hopes Riding on a Chocolatier."

Petro Poroshenko has been also dubbed a "political chameleon" by media sources. His political career started in the late 1990s. In 2000 he co-founded the Party of Regions, but a year later Poroshenko "became a leading supporter and financial backer of Viktor Yushchenko's Our Ukraine party" (the main rivals of Viktor Yanukovich and the Party of Regions), underscores Robert Coalson, a Radio Free Europe/Radio Liberty editor. In 2004, Poroshenko backed the Ukrainian Maidan election protests and worked in Yushchenko's government until 2010. However, it didn’t stop him from serving eight months as a trade and economic development minister on Yanukovich's team in 2012. Afterwards he returned to parliament "as an independent deputy from the central city of Vinnytsya," Coalson notes.

Experts qualify Poroshenko as a politician who has always been guided mostly by opportunism rather than by high principals. Robert Coalson stresses that political analysts were surprised by Poroshenko's high polls on the threshold of the 2014 presidential election. He cites Ivan Lozowy, a Ukrainian independent analyst as saying: "He [Poroshenko] hasn't really been known for anything in the past several years and nothing of note has happened with him. He hasn't done anything of note in the past several months." Regarding Poroshenko's political career, Lozowy told the New York Times, that "[Petro Poroshenko] bought his way in; that's the way it works in Ukraine."
It's worth mentioning, that American diplomatic cables, disclosed by Wikileaks, stated in 2006 that "Poroshenko was tainted by credible corruption allegations, but wielded significant influence within OU [Our Ukraine political party]; Poroshenko's price had to be paid." Although the US authorities knew Poroshenko was corrupt, they considered him a useful "insider."

"During an April 28 [2006] meeting with the Ambassador, Our Ukraine (OU) insider Petro Poroshenko emphatically denied he was using his influence with the Prosecutor General to put pressure on Tymoshenko lieutenant Oleksandr Turchynov," read one of the US Embassy's  confidential documents. According to the US diplomatic cables, Poroshenko had been informing the US Ambassador about the political situation in Kiev. The Washington Post points out that Wikileaks' American diplomatic correspondences contain numerous mentions of the notorious politician. Thus, it seems unsurprising that Washington was quick to insist his election was legitimate.
Experts admit that embarrassing practices such as open lobbying, nepotism and the threatening of political opponents which were associated with the previous government were infamously revived by the new leadership in Kiev.

"In a clear sign of not-nepotism, Poroshenko's son Oleksiy is running for parliament on dad's list," Ian Bateson, a staff writer at the Kyiv Post, tweeted on September 14.

The Kyiv Post reporter’s insight sparked a debate among his followers.

@ianbateson Great! The end of beginning - old customs live on

Furthermore, the "lustration" bill, initially aimed at defending democracy and fighting corruption, has been turned into a "mechanism of selective political persecution", geared at ousting Kiev's political competitors, says Volodymyr Yavorsky, a member of the Ukrainian Helsinki Human Rights Union, as cited by Ukraine Business Online.

In an interview published on the web site of Tatyana Montyan’s political movement Spilna Diya, the famous Kiev-based lawyer stresses that the corrupt former leadership which had been ousted by Euromaidan was then replaced by another venal group of "bloodthirsty scoundrels." The Ukrainian people have been divided into two rival groups – "ukrops" and "colorados," – by the new leadership, which is earning money on the civil war, Tatyana Montyan emphasizes. Euromaidan has become a catastrophe for Ukrainian political institutions: the country is ruined and its social and economic prospects look uncertain and bleak, the lawyer says. "I hope that the Vinnitskaya gang [Poroshenko's team] which is ruling the country right now won't be able to escape from the state [and stay unpunished]," she says. Ukrainians have become disillusioned by Euromaidan: "they are horrified to realize" that they have sacrificed lives for the new shameless "feudal lords," the lawyer underscores pessimistically.