Mali’s Path From Democracy to Islamism 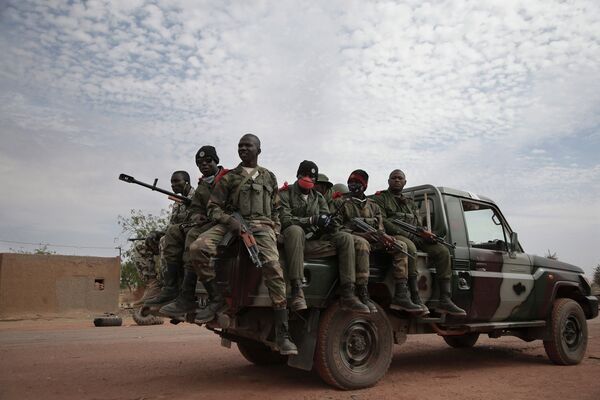 The Malian crisis of 2012 brought to the forefront of the African Islamist movement two jihadist groups that split from Al-Qaeda in the Islamic Maghreb, or AQIM - the Masked Men and the Movement for Monotheism and Jihad in West Africa.

The Malian crisis of 2012 brought to the forefront of the African Islamist movement two jihadist groups that split from al-Qaeda in the Islamic Maghreb, or AQIM - the Masked Men and the Movement for Monotheism and Jihad in West Africa.

Mali’s Path From Democracy to Islamism

After falling out with the leaders of the al-Qaeda’s wealthiest branch, Mokhtar Belmokhtar, the veteran of the anti-Soviet insurgency in Afghanistan, formed his own jihadist group, dubbed the Masked Men, also known as Those Who Sign In Blood Batallion.

Belmokhtar and his associates are responsible for organizing the In Amenas operation, when over 800 people were taken hostage at a gas facility in eastern Algeria. The Masked Men have also supported the Tuareg uprising in northern Mali in 2012, thus extending its political agenda further into Western Africa. There is strong connection between the instability in Algeria and turbulence in northern Mali, says Jean Pierre Darnis, Deputy Director of the Security and Defense Program at Institute of International Affairs in Rome, Italy.

“There is a willing from the terrorists on the Sahel area where the borders are extremely open in a way, or difficult to control by the states, specifically by Algerian forces, to extend this conflict and to globalize it and they are doing it on the scene,” Jean Pierre Darnis said.

The Tuareg rebellion has also brought to prominence another AQIM splinter group, the Movement for Monotheism and Jihad in West Africa, or MUJAO. The group controlled the town of Gao in northern Mali between 2012 and January 2013. MUJAO is also responsible for kidnapping Algerian diplomats in Mali in 2012.

In January 2013, then-US Secretary of State Hillary Clinton compared the security risks in Mali to those of Taliban-era Afghanistan. Experts say the Tuareg rebellion contributed to the rise of Islamist groups in West Africa that pose the unprecedented threat for the region. Before the 2012 uprising, Mali was like a shining light of democracy in that part of the world, says Tobias Feakin, the Director of National Security Program at the Australian Strategic Policy Institute.

“However, that situation arose from Tuareg fighters returning from Libya and having fought with Colonel Gaddafi, returning to the north of Mali highly armed, highly motivated and for many-many decades they’ve been wanting an independent state in northern Mali for their own. And having returned well equipped and well-motivated, they began to fight the Malian Army to replace in northern Mali,” Tobias Feakin said.

In 2013, the Masked Men and MUJAO announced their merger under the name of El-Mourabitoun, establishing strong presence in the northern regions of Mali.