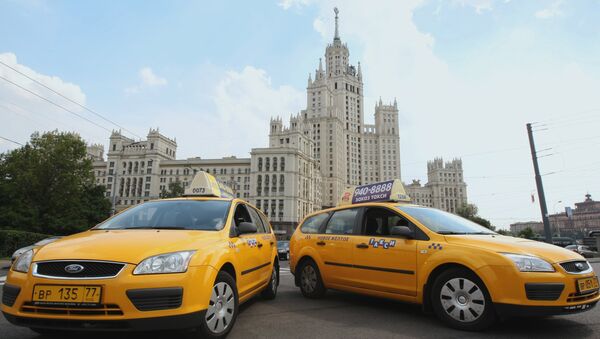 © RIA Novosti . Ruslan Krivobok
/
Go to the photo bank
Subscribe
Uber, the popular online app that provides taxi services, may soon be banned in Russia, as Alexander Starovoitov, the deputy chairman of the State Duma’s Committee on Transport has written a letter to President Vladimir Putin and Prime Minister Dmitri Medvedev, urging them to consider prohibiting the company from operating in the country.

MOSCOW, September 18 (RIA Novosti) — Uber, the popular online app that provides taxi services, may soon be banned in Russia, as Alexander Starovoitov, the deputy chairman of the State Duma’s Committee on Transport has written a letter to President Vladimir Putin and Prime Minister Dmitri Medvedev, urging them to consider prohibiting the company from operating in the country.

Starovoitov noted that the Russian taxi market “faces a collapse” due to the company’s recent entry into the Russian market, even though its services are limited for now to Moscow and St. Petersburg. By offering a minimum rate of 99 rubles, about $2.50 US, the lawmaker fears that the taxi app will force legitimate taxi companies which pay for licensing, documentation, liability insurance, and taxes out of business.

The lawmaker listed many problems in the company’s business model, noting in his letter that they aren’t interested “in the quality of drivers, their qualification, [or] the license status of those who offer their services.”

Addressing the Duma, Starovoitov also asked “who would take responsibility for the rights of the passenger” in the event of an irresponsible or dangerous driver.

Linking the issue to the latest round of sanctions, Starovoitov also said that “taking account of the sanctions leveled by the United States against Russia, it would be unacceptable for authorities to allow this American company to quietly capture the taxi market.”

Moscow’s Department of Transport supported the lawmaker’s proposal, noting that that without strict control (which Uber doesn’t seem able to provide), the company’s entry into Russia will result in a dramatic increase in illegal drivers.

“Companies like these are not certified, and face no liability or responsibility for quality of service. This raises a lot of questions…We also know that the authorities of other cities where the company operates are also concerned about the work of such services,” a representative from the department told Russian newspaper Izvestia.

Uber, which started as a ridesharing service in San Francisco in 2009, has expanded to 45 countries and over 100 cities, and its expansion has carried with it a string of protests and lawsuits from licensed taxi companies and local city governments across Europe, North America and Asia.

The company has been banned in Belgium and Germany as a result of safety concerns, and has faced fines, vehicle impoundments and partial bans in cities including Toronto, Seoul, New York City, Chicago, and San Francisco, among others. The state of California has approved a bill which enters into force next year which attempts to force companies like Uber to provide liability insurance or face prohibition.

Russia has its own taxi applications for mobile phone users, the largest of which is Yandex.Taxi. The company operates in over half-a-dozen cities across Russia, and has a 199 ruble ($5.15 US) starting rate.

Deputy Chairman of the Coordinating Council of Professional Taxi Associations Irina Zaripova has noted that Russia can and should do more to develop its own internet-integrated taxi systems, voicing her belief that providers can offer services “of a higher quality, and using legitimate taxi companies.”

Zaripova told Izvestia that using the country’s GLONASS satellite network would result in better, more accurate service. GLONASS has been said to be more effective than GPS in northern areas due to the orbits of its satellites.