Ban Ki-moon: International Community Will Stand Together Against Terrorism 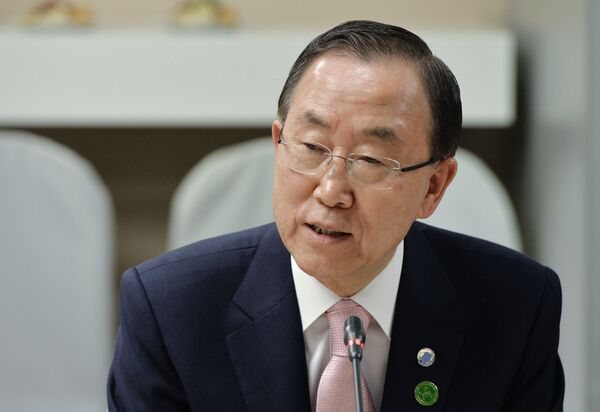 Previewing the upcoming UN General Debate, Secretary General Ban Ki-moon said Tuesday that the United Nations will stand together in dealing with terrorism in Syria and Iraq.

"Together, we will address the horrendous violence in Syria and Iraq, where conflict and governance failures have provided a breeding ground for extremist groups," Ban Ki-moon said.

Linking terrorism between regions, the UN leader said that "in Nigeria, the advances of Boko Haram grow more alarming every day. As in Syria and Iraq, we are seeing terrorist organizations not only carrying out attacks, but seizing large areas of land beyond the government's control."

Turning to Africa, he said that "violence continues in Mali, South Sudan and the Central African Republic. We will not let these crises be forgotten – and we will meet next week at the highest level to determine what more we can do."

On Gaza, about which the Security Council received a briefing earlier on Tuesday from Ban Ki-moon's envoy Robert Serry, the Secretary General said "in the aftermath of yet another devastating war in Gaza, Israelis and Palestinians seem more polarized than ever."

During the conflict in Gaza and in its aftermath, the Security Council has not adopted any resolution on the topic. "I hope the Council will have the opportunity to make its own position clear. This would be a welcome step of confidence, commitment and hope at a time when the parties and the world desperately need it," Serry said on Tuesday.

"In my main speech to the Member States next Wednesday, I will call on world leaders to unite and uphold human dignity, the rule of law and the principles of the United Nations Charter," Ban Ki-moon stated.

The General Debate of the 69rd Session of UN's General Assembly is set to take place in the UN headquarters in New York from September 24 to 30.