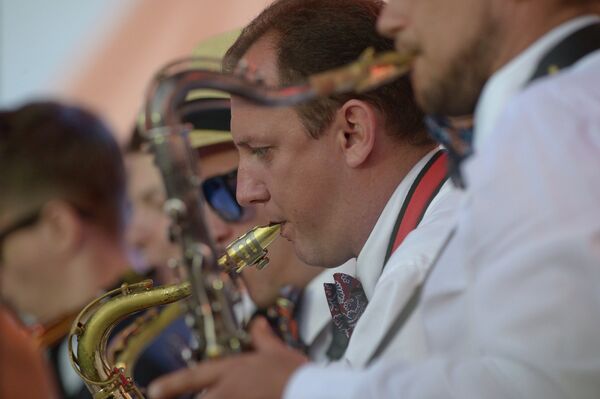 "It's a great environment [Crimea]. Everyone seems very happy. It is a very safe and beautiful place. That's what I heard it was going to be like and that is what it is like," Escoffery said.

The saxophonist also noted that the best way to learn history is by asking people, who are involved in it, not from the media.

"I don't live here. And Americans don't live here. So, all we hear is the news that we are told," Escoffery said, adding that he, as well as the other members of the quintet and their relatives, did a lot of research to find out what is really happening. "Also, I was in Moscow about three weeks ago and I spoke with a lot of people, so I had an idea about what the situation actually is," the musician added.

Escoffery also acknowledged the high level of event's organization and the powerful energy that the audience in Koktebel displayed.

"In every country the audience has a different energy. Some audiences have more spiritual energy than others. But this audience [in Koktebel] had a very spiritual feeling and a lot of energy. And when the audience gives us that kind of energy, it makes us play better and gives us power. So, it was a beautiful audience," Escoffery said.

The Koktebel Jazz Party was organized by Rossiya Segodnya Information Agency with support from Russia's Ministry of Culture. Hosted by Crimea's Koktebel on September 12-15, the festival united music lovers and big names in jazz music from all over the world.

Located on the beach, the open-air stages provided live music by performers from all over the world, making Koktebel Jazz Party Crimea's first international high-profile event since reunification with Russia.