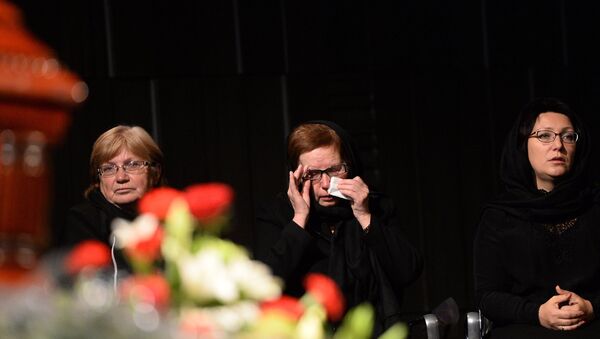 The mother of late Rossiya Segodnya photographer Andrei Stenin, who lost his life in Ukraine, is thankful to everyone who believed her son was alive and did their best to find him.

MOSCOW, September 15 (RIA Novosti) — The mother of late Rossiya Segodnya photographer Andrei Stenin, who lost his life in Ukraine, is thankful to everyone who believed her son was alive and did their best to find him.

"I thank all the people in Russia and abroad who were not indifferent to the fate of my son, who believed that Andrei was alive. I thank the country's leaders and media for putting in all their efforts to locate my son. I bow down to those who found Andrei while putting their own lives at risk and brought him back to me," Andrei Stenin's mother, Vera Stenina, wrote in a letter to International Information Agency Rossiya Segodnya.

In her message, Stenina thanked a number of politicians, including Russian President Vladimir Putin, Prime Minister Dmitry Medvedev, Chairman of the Federation Council Valentina Matviyenko and Chief of Staff of the Presidential Executive Office Sergei Ivanov.

Stenina addressed her son's colleagues from Rossiya Segodnya as well, and gave special thanks to the agency's Director General Dmitry Kiselev and his deputies Yelena Chepurnykh and Galina Kozhina.

She also expressed gratitude to journalists from Russia's Channel-1, VGTRK, REN TV, TV Tsentr, Channel 5, Mir TV, Rossiyskaya Gazeta, the Kommersant publishing house, the National Media Group and LifeNews, and "all those who shared the pain from this irreplaceable loss and showed their support during these difficult days".

Stenin went missing in eastern Ukraine on August 5. Sources suggested that the Ukrainian military could have detained the journalist, but Kiev never officially confirmed the information.

On September 3, Rossiya Segodnya Director General Dmitry Kiselev said that, according to information from the Russian Investigative Committee, Stenin died about a month ago near Donetsk when the car he was traveling in while on an editorial assignment was shot at and torched on a highway just outside the city.

A farewell ceremony for Stenin was held on September 5 at the Rossiya Segodnya international press center. Stenin was buried at Troyekurovskoye Cemetery in Moscow.