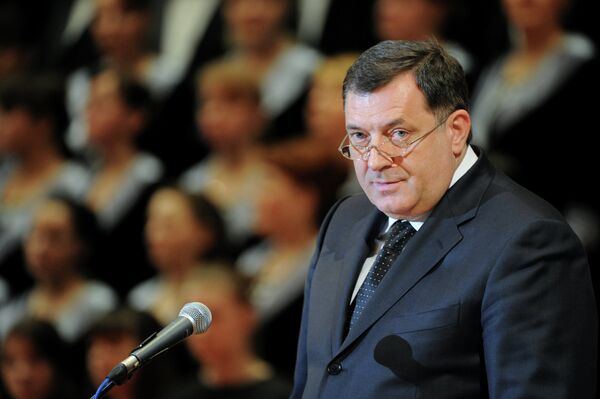 © RIA Novosti . Sergei Pyatakov
/
Go to the photo bank
Subscribe
Bosnian Serbs are closely monitoring the referendum on Scottish independence in hopes that a "yes" vote will boost their own chances of proclaiming a separate state, Agence France-Presse (AFP) reported on Monday.

MOSCOW, September 15 (RIA Novosti) - Bosnian Serbs are closely monitoring the referendum on Scottish independence in hopes that a "yes" vote will boost their own chances of proclaiming a separate state, Agence France-Presse (AFP) reported on Monday.

"We are following what is going on in Italy (South Tyrol), in Scotland and even in Catalonia. These are crucial experiences for the RS," president of Bosnia's Serb-run entity Republika Srpska (RS), Milorad Dodik, was quoted as saying by AFP.

"The goal of my politics is that we become less an entity and more a state," Dodik said last Friday at an election rally.

Talks of independence have been incorporated in Dodik's speeches leading up to general elections scheduled for October 12.

"If a referendum was organized tomorrow, most of the Serbs would be in favor of independence," said Milos Solaja, professor of international relations at the University of Banja Luka.

While he claims secession "is not realistic at this moment," he went on to say "Republika Srpska is de facto already a state given its huge statehood attributes." However the high representative of the international community in Bosnia, Valentin Inzko, claimed the country's constitution "allows no possibility for either entity to secede."

Many experts believe that the desire for independence could lead to another armed conflict. According to analyst Dragan Stavljanin, conflict could attract Muslim extremists separating Bosnia into two states, one of which would be Muslim-dominated.

The Dayton Accords that ended Bosnia's 1992-95 inter-ethnic war created the Republika Srpska and the Muslim-Croat Federation. Bosnia's proclamation of independence in 1992 came at the price of a brutal war in which Serbs fought against Muslims and Croats, claiming 100,000 lives.

A referendum on Scottish independence will be held on 18 September. If the majority of people vote for independence, Scotland will secede from the United Kingdom on March 24, 2016.