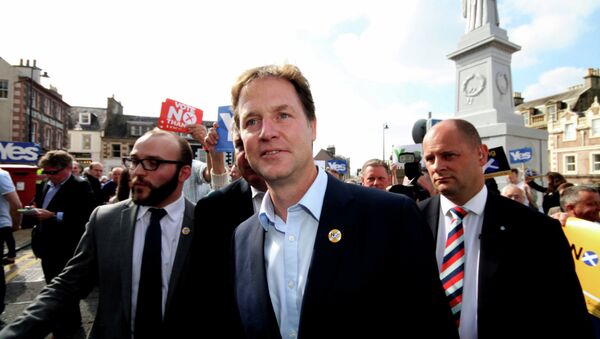 © Sputnik / Mark Hirst
Subscribe
The Deputy Prime Minister of Britain, Nick Clegg, has told RIA Novosti that he "very much hopes" the world is not witnessing the finals days of the United Kingdom.

Clegg was in Scotland Wednesday along with British Prime Minister David Cameron and main opposition leader Ed Miliband in a final bid to persuade Scottish voters to reject Scottish independence and vote No in a referendum to be held on September 18.

Speaking in the Scottish town of Selkirk where the historic Scottish independence leader William Wallace was made “Guardian of the Realm” in 1297AD, Clegg told reporters, “This is a momentous decision. There is nothing else more important right now.”

“Clearly this is a very close contest, clearly every vote counts and it is right that people like me, I don’t get a vote as I’m an English MP, make our views known,” Clegg said.

“This is a decision forever. It is a momentous decision that will affect my children, my grandchildren and future generations,” Clegg added.

“It’s not a decision that can be taken one day and you can undo the next, so it is really important that everybody hears both sides of the arguments.”

Alistair Carmichael, who is a member of the UK Government and holds the position of Secretary of State for Scotland in the British Cabinet, told RIA Novosti that the decision by the three leaders to travel to Scotland was “significant.”

“It is important and significant that people understand that although this is our decision to make this is a decision that will have an impact on the whole of the United Kingdom and people in Scotland should hear the message that people in the rest of the UK care about the decision we make,” Carmichael told RIA Novosti.

Carmichael rejected the accusation made by the pro-independence Yes Scotland campaign that the decision of the three UK party leaders to travel to Scotland to campaign for a No vote amounted to a panicked reaction by the anti-independence campaign.

“That is a very typical response and mere desperation to talk about the campaign rather than the issues that should be arising from the campaign,” Carmichael told RIA Novosti.

“They [Yes Scotland] are desperate to talk about the conduct of the campaign rather than the currency, or our position within the EU, or what it would mean for pensions,” Carmichael added.

“This is a big moment and shows how committed each of the UK party leaders are to the future of the United Kingdom and Scotland’s part in it,” Moore told RIA Novosti.

“The polls are a bit tighter than they were but I think that is bringing out the best in terms of a good lively debate this morning and the prospect that we can focus on the issues in the last few days before the vote itself,” Moore added.

Asked by RIA Novosti about Prime Minister David Cameron’s comments in Edinburgh earlier in the day in which Cameron said a formal currency union between Scotland and the rest of the UK would not work, Moore replied, “I have always taken the view that a currency union for an independent country would bind us in with a country ten times our size with precious little control over our future.”

“I’ve never quite understood why the nationalists would argue this [the currency union] would be the best thing for an independent Scotland,” Moore told RIA Novosti.

“For now English politicians have made clear what they think is in the best interests for the rest of the country and if we vote for independence we need to argue that out,” Moore said.

“At the moment there is great uncertainty about what that would mean,” Moore added.

Elsewhere the former Labour Deputy Prime Minister, John Prescott, also in Scotland campaigning against independence, told the BBC that Prime Minister Cameron’s visit was more of a “hindrance” to the No campaign.

Scottish voters go to the polls on September 18 and will be asked one question in an historic referendum, “Should Scotland become an independent country?”

The Deputy Prime Minister of Britain, Nick Clegg, has told RIA Novosti that he "very much hopes" the world is not witnessing the finals days of the United Kingdom.

Asked by RIA Novosti whether the world was witnessing the final days of Britain, Clegg replied, "I very much hope not."

The Deputy Prime Minister was in Scotland along with the Prime Minister David Cameron and the official Leader of the Opposition Ed Miliband MP in a final bid to persuade Scottish voters to reject Scottish independence and vote No in a referendum to be held on September 18. Voters will be asked one question, "Should Scotland become an independent country?"

Earlier, in a plea addressed to the Scottish public through the Daily Mail, UK Prime Minister David Cameron stated that a Yes vote would mean "a leap into the dark", while a No vote would bring Scotland a brighter future.

"So the choice for you is clear: a leap into the dark with a Yes vote, or a brighter future for Scotland by voting NO. You can have the best of both worlds in the UK", Cameron stated in a plea penned for the Daily Mail on Tuesday.

In his article, Cameron cautioned Scots against the costs they will incur should the referendum yield a Yes result, paid health care among other things.

"No Vote doesn't mean a vote for the status quo – NO doesn't mean no change. It means significant further devolution for Scotland – major new powers over tax, spending and welfare all being passed to Scotland", Cameron warned.

Cameron assured the Scottish public that within the structure of the UK, Scotland will continue to be granted more autonomous power.

Cameron also reminisced about Westminster's contribution to the Scottish enlightenment and industrial revolution, at the same time granting Scotland a considerable amount of self-governance.

Scotland is to hold a referendum on independence on September 18.