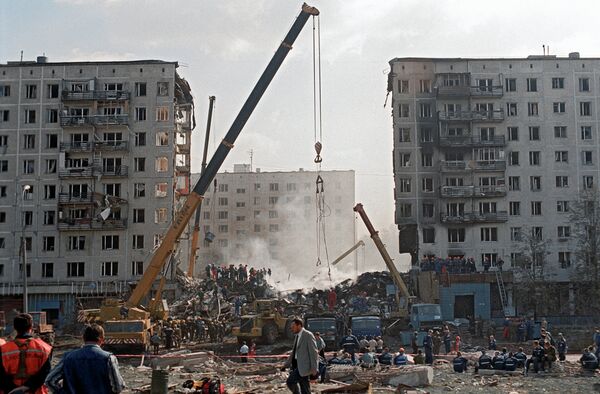 © RIA Novosti . Dmitry Korobeynikov
/
Go to the photo bank
Subscribe
On September 9th, Russians are commemorating the victims of a terrorist attack on Guryanova Street in Moscow, which was carried out by radical Islamists in 1999.

MOSCOW, September 8 (RIA Novosti), Ekaterina Blinova - On September 9th, Russians are commemorating the victims of a terrorist attack on Guryanova Street in Moscow, which was carried out by radical Islamists in 1999.

"The criminals have thrown down a sinister challenge. They are trying to scare the Russian people and intimidate the state. We already know who is behind the blasts: The name of the criminal is terrorism," then-President of Russia Boris Yeltsin proclaimed in September, 1999.

During the night of September 9, a sudden, powerful explosion destroyed more than a hundred apartments in a nine-storey housing block on Guryanova Street. The tragedy was later dubbed "Russia's 9/11" by the Western media; 106 died and 264 were injured (among them 86 children).  Up to fifteen additional buildings were damaged by the blast.

The Guryanova Street explosion was followed by another act of terrorism in Moscow: an eight-storey building was blown up on September 13 on Kashirskoye Shosse. Just a few days after the second blast in Moscow, terrorists attacked residential buildings in the Russian city of Volgodonsk.
The string of attacks resulted in the deaths of hundreds of innocent Russian civilians and sparked a national debate regarding the need to enhance state security.

An official investigation revealed that the acts of terrorism had been conducted by members of Chechen cells led by radical Islamists Shamil Basayev and Commander Ibn al-Khattab. These terror acts coincided with the Chechen invasion of Dagestan, which Basayev and al-Khattab launched in order to establish an Islamic Republic there.

It's worth mentioning that several days before the tragic events in Moscow, Commander al-Khattab, who reportedly had links to al-Qaeda and its notorious leader Osama bin Laden, claimed that he was going to attack Russia's heartland. "The mujahideen of Dagestan are going to carry out reprisals in various places across Russia," he said, as cited by Agence France Press in an article, "Chechen Guerrilla Khattab, Veteran of Anti-Struggle," published on September 14, 1999. According to the Russian authorities, almost all Islamist insurgents responsible for the explosions in Moscow and Volgodonsk in 1999 were subsequently imprisoned or killed during the antiterrorist operations.

According to pollsters, Russians feel far more secure now than they did in the beginning of the 2000s. The Levada Center's latest survey has indicated that more than half of all respondents believe that the domestic terrorist threat has diminished significantly in Russia in the last decade. At the same time, 55 percent of Russian civilians approve of the Kremlin's policy towards the North Caucasus.

Russians still remember the tragic events of September 1999 and mourn those who were killed in the explosions. In 2000, a bronze monument was erected on the site of the destroyed housing block on Guryanova Street to commemorate the innocent victims of Islamist brutality. Three years later, in 2003, the Moscow authorities ordered that a chapel be built on the site, which would be dedicated to the Icon of the Mother of God, "Joy of All Who Sorrow." The chapel has become a sacred place where people can pray for all of the victims of terrorism.

000000
Newsfeed
0
New firstOld first
loader
LIVE
Заголовок открываемого материала
Access to the chat has been blocked for violating the rules . You will be able to participate again through:∞. If you do not agree with the blocking, please use the feedback form
The discussion is closed. You can participate in the discussion within 24 hours after the publication of the article.
To participate in the discussion
log in or register
loader
Chats
Заголовок открываемого материала
Worldwide
InternationalEnglishEnglishMundoEspañolSpanish
Europe
DeutschlandDeutschGermanFranceFrançaisFrenchΕλλάδαΕλληνικάGreekItaliaItalianoItalianČeská republikaČeštinaCzechPolskaPolskiPolishСрбиjаСрпскиSerbianLatvijaLatviešuLatvianLietuvaLietuviųLithuanianMoldovaMoldoveneascăMoldavianБеларусьБеларускiBelarusian
Transcaucasia
ԱրմենիաՀայերենArmenianАҧсныАҧсышәалаAbkhazХуссар ИрыстонИронауОssetianსაქართველოქართულიGeorgianAzərbaycanАzərbaycancaAzerbaijani
Middle East
Sputnik عربيArabicArabicTürkiyeTürkçeTurkishSputnik ایرانPersianPersianSputnik افغانستانDariDari
Central Asia
ҚазақстанҚазақ тіліKazakhКыргызстанКыргызчаKyrgyzOʻzbekistonЎзбекчаUzbekТоҷикистонТоҷикӣTajik
East & Southeast Asia
Việt NamTiếng ViệtVietnamese日本日本語Japanese中国中文Chinese
South America
BrasilPortuguêsPortuguese
NewsfeedBreaking
18:21 GMTWhite House Confirms US Will Not Send Representation to 2022 Winter Olympics in Beijing
17:32 GMTKorean Treat and Eurovision Winner Among Most Mispronounced Words of 2021
17:24 GMTWhitehall Union Claims Victory After Court Dismisses its Case Against Johnson and Patel
17:14 GMTPope Francis Stumbles on Airstair as He Boards Plane in Greece - Video
17:02 GMTTrump’s Social Media Listing Vehicle Says Under Inquiry From US Securities Investigators
16:47 GMTRussia, Egypt Start Naval Phase of 'Bridge of Friendship-2021' Drills in Mediterranean
16:40 GMTUS Reportedly Mulls Cutting Russia Off SWIFT, Sanctioning Energy Producers & 'Putin's Inner Circle'
16:37 GMTFinland’s PM Parties at Nightclub Until 4am After Contact With COVID-Positive Official
16:14 GMTSecond Week of Ghislaine Maxwell Sex Scandal Trial Kicks Off
15:56 GMTBoost for Britain! Is the UK’s COVID-19 Third Jab Campaign Saving Lives?
15:55 GMTWestminster Preparing 10-Year War on Drugs in Attempt to Defeat County Line Gangs
15:44 GMTIsrael Will Reportedly Push US to Strike Iranian Facility Amid Lack of Progress in Vienna Talks
15:41 GMTAmerica Unveils First-Ever Strategy to Battle Corruption at Home and Abroad
15:30 GMTChina May Build Military Base in Equatorial Guinea Amid Beijing’s Tensions With Washington
15:15 GMTKremlin: Putin Will Listen to Biden's Proposals on Ukraine 'With Great Interest'
15:15 GMTNYC to Use 'Preemptive Strike' Against Omicron With Vaccine Mandate for all Businesses, Mayor Says
15:08 GMT3,000 Security Officers Guard India's Mathura as Hindu Group Threatens to Install Idol in Mosque
14:59 GMTAmid Rumours of US Boycott of Beijing Olympics, How Could the Move Affect the Games?
14:52 GMTUK Policing Minister Not Surprised Over Reports of Drug Use in Parliament Building
14:45 GMTLabour Unions Protest in Brussels Against Low Wages, Expensive Electricity - Photos