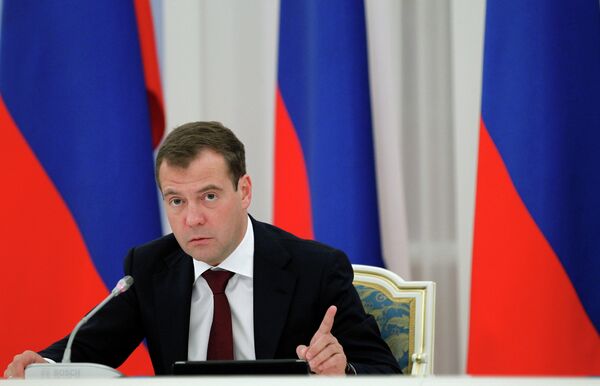 © RIA Novosti . Dmitry Astakhov
/
Go to the mediabank
Subscribe
International
India
Africa
Russian Prime Minister Dmitry Medvedev commented on the possible new round of the EU sanctions against Russia, cooperation with Asian partners and power shortages in Crimea in an interview in the Vedomosti newspaper released on Monday.

MOSCOW, September 8 (RIA Novosti) – Russian Prime Minister Dmitry Medvedev commented on the possible new round of the EU sanctions against Russia, cooperation with Asian partners and power shortages in Crimea in an interview in the Vedomosti newspaper released on Monday.

ON POSSIBLE NEW ROUND OF SANCTIONS

Russian Prime Minister Dmitry Medvedev told the Vedomosti newspaper that Russia could close its airspace in response to new Western sanctions against Moscow in the energy or finance sector.

“It is them [the West], who should be asked whether there will be new sanctions. But if there are sanctions, linked with energy, [or] further restrictions on our finance sector, we will have to respond asymmetrically. For instance, [with] restrictions in transport area. We act on the premise of friendly relations with our partners, and this is why the sky above Russia is open for flights. But if we are restricted, we will have to answer,” Medvedev said in an interview.

The prime minister said that certain Western airlines could go bankrupt if they are banned from using Russia’s airspace.

“But this is a bad option. I just would like our partners to realize it at a certain moment. Especially, [considering the fact] that the sanctions do not help to establish peace in Ukraine. They miss [beside the mark], and an absolute majority of the politicians understand it. There are just an inertness of thinking and, unfortunately, the will to use force in international affairs,” Medvedev stressed.

Speaking on the Ukrainian conflict, he said there are chances that it will be resolved if the Ukrainian leadership has the will to implement proposals recently put forward by Russia.

On September 3, Putin outlined a seven-point plan for settling the crisis in Ukraine, calling on Kiev to withdraw troops from southeastern regions of the country and the militia to cease its military advances. The plan also includes proposals for an international monitoring force, the establishment of a humanitarian corridor, a ban on the use of combat aircraft over urban areas, an exchange of prisoners in an "all for all" formula and direct access for workers to repair destroyed infrastructure in the war-ravaged areas.

“Both representatives of the adversary and the militia have accepted this plan with certain reservations. So now a delicate work should be underway aimed at preserving peace. I hope this will be a successful effort,” Medvedev said.

A number of key Russian oil and defense industry companies and banks could become subject to a new round of economic sanctions due to be imposed by Brussels Tuesday, The Wall Street Journal reported Sunday, citing to EU documents.

Rosneft, Gazpromneft and Transneft are among the oil companies included in the sanction list The Wall Street Journal said it examined.

They will reportedly be banned from raising funds with a maturity period exceeding 30 days. The same restriction will be imposed on five Russian state-controlled banks, including Sberbank and VTB Bank, already forbidden from raising loans in European Union member states for longer than 90 days, the newspaper said.

In late July, the European Union and the United States imposed restrictions against Russia’s oil and banking sectors over Moscow’s stance in the Ukrainian internal conflict. In response, Russia banned certain food product imports from nations which introduced sanctions on Russia.

Further sanctions against Russia could hamper global security as economic sanctions could lead to political sanctions, Medvedev said in the interview released Monday.

“We understand that at first, sanctions are of economic character, and then political sanctions come in response and political things are always asymmetrical. And this is more threatening that limiting supplies: the security system in the world could be undermined. I hope that our Western partners do not want this and there are no crazy people among those who take the decisions,” he said, Vedomosti reported

Medvedev said Moscow counts on significant investment into Russian regions, including in the Far East, from both Russian and foreign entrepreneurs.

“We have regions which should receive most significant funds,” Medvedev said adding that some 350 million rubles ($9.4 million) will be allocated from the federal budget for the development of the Far East.

Russia’s turn to Asia is an overdue measure driven not by Western sanctions but the need to diversify commodity flows, Medvedev said.

“Russia’s trade with China currently stands at around $100 billion, while Russian trade with Europe is $450 billion. This is practically half of Russia’s total trade. It is evident that we should be actively present in the Asia-Pacific region,” he said.

“We should trade and receive investment, work with China, India, Vietnam and other players in the Asia-Pacific region, ” Medvedev told the newspaper, adding that he sees no major problems if reasonable decisions are taken.

“Certain parts of Ukraine also have power shortages and receive electric energy from Russia. And he who makes not really smart decisions about restricting power supply to Crimea, should realize that symmetrical measures are possible,” Medvedev was quoted by the newspaper as saying.

Medvedev said an autonomous power system that will rely on Russia should be created in the region. “Taking into consideration that Crimea is a power-hungry territory, this also becomes a factor in the political game,” he said.

Moscow has allocated $27 million in aid for refugees from Ukraine, Medvedev told Vedomosti in the interview.

“This is a humanitarian tragedy; we are considering this and are already adding funds to the regions. And this is not a small amount of money. Over the recent time, I had to make a number of decisions, relating to funding the refugees’ presence, which already reached around $27 million,” Medvedev said in the interview published Monday.

The influx of refugees from southeastern Ukraine to Russia, who had to flee their homes due to the armed conflict between the government's forces and the pro-independence movement, has increased in recent months.

According to Russia’s Federal Migration Service, around 820,000 Ukrainians have crossed the border into Russia since April. On Sunday, a representative for Russia’s emergency response center told RIA Novosti that more than 1,000 temporary accommodation facilities housing around 59,000 people have been established across the country.

MEDVEDEV ON $40 BLN AID TO ROSNEFT

Medvedev said that allocating more than $40 billion from Russia’s National Welfare Foundation for oil giant Rosneft could be reasonable, as the investment will be repaid.

“This number only seems so impressive, but this is not [supposed to be repaid] within a year,” Medvedev said, answering a reporter’s question on whether Rosneft’s request for $40 billion is feasible.

“The company needs to keep up production, since Rosneft is a major contributor to the budget. In this regard, we have to help them by maintaining the investment level,” Medvedev explained, adding that the government is considering specific ways of aiding Rosneft.

Medvedev also stressed he had no doubt in the investment's returns, considering Rosneft’s prospects in the middle and long-terms.

In August, Rosneft chief Igor Sechin requested a government loan of some $40 billion from the National Welfare Foundation due to Western sanctions. Earlier, the United States introduced another wave of economic restrictions on Moscow over its stance in the Ukrainian conflict, seriously complicating Western funding for Rosneft and a number of other key Russian oil and gas companies.