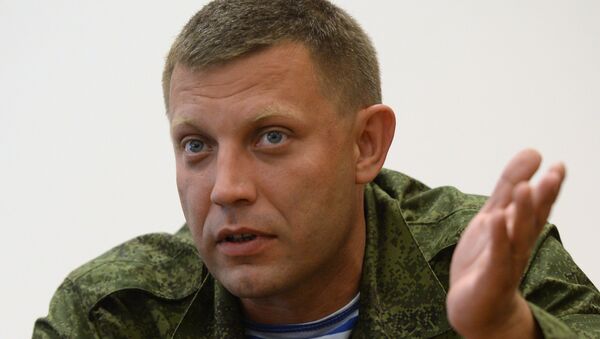 According to Zakharchenko, the Donetsk and Luhansk people’s republics have proposed routes for three humanitarian corridors, “however, Kiev refuses to coordinate their routes.”

Earlier on Monday, the head of the Ukrainian State Fiscal Service Igor Belous said he still has no information on how exactly the second convoy of Russian humanitarian aid will be delivered. He explained that if it is a truck convoy, it will pass through the same checkpoints as the first one.

The first convoy of 280 trucks carrying Russian humanitarian aid was sent to eastern Ukraine in August and entered the country’s territory through a checkpoint controlled by independence forces after more than a week waiting at the border.

On September 4, Russian Deputy Emergency Situations Minister Vladimir Artamonov said that almost 2,000 tons of humanitarian aid are ready to be sent with the second humanitarian convoy to southeastern Ukraine.

Last week, the participants of the Minsk talks on the Ukrainian crisis settlement agreed to organize two more humanitarian convoys from Russia to eastern Ukraine. According to the Russian Ambassador to Ukraine Mikhail Zurabov, the first batch will be sent by road and the second one by rail.