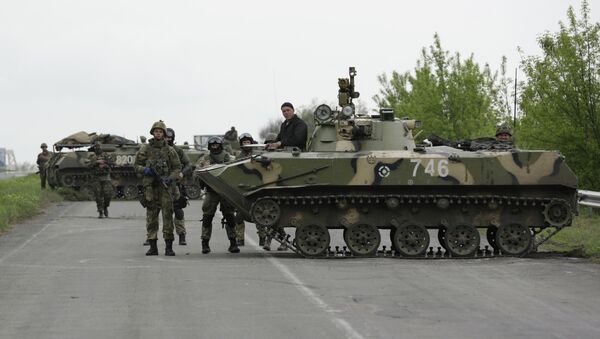 "Ukrainian military fully comply with the terms of the ceasefire," Polevoy said during a briefing on Suday. However, the militia forces have opened fired on a number of positions of Ukrainian security forces in the last 24 hours.

"Our troops have recorded an attempt to attack the Donetsk airport, which is under the control of the Ukrainian military. We have no insight regarding the shelling of Donetsk," Polevoy said.

Earlier the same day, the DPR militia stated that Ukrainian troops had repeatedly shelled the militia positions early on September 7, as well as the cities that remained under their control, in particular Khanzhonkovo, Makeevo, Yenakiieve, killing one person and destroying several houses.

The Organization for Security and Cooperation in Europe’s (OSCE) website has published the full text of the protocol signed on Friday after a meeting of the trilateral Contact Group in Minsk concerning the situation in Ukraine. According to the agreement, Ukrainian authorities are required to adopt a law prohibiting the prosecution and punishment of individuals who participated in events “in certain areas” of Donetsk and Luhansk regions in Eastern Ukraine.

Ukraine has been engulfed in violent internal conflict since mid-April, when Kiev began its military operation against independence supporters in the southeastern regions of the country. According to United Nations’ estimates, over 2,500 people have been killed and more than 6,000 wounded since the start of the offensive.