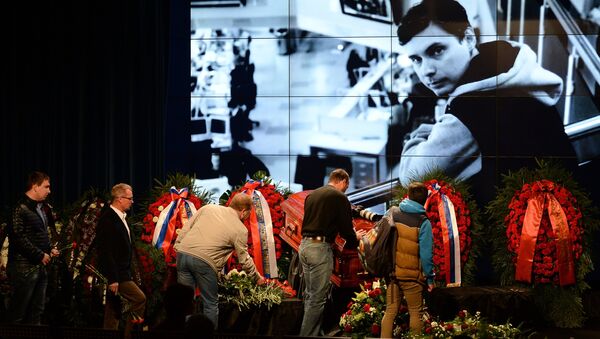 “The fact that today a truce or a ceasefire will be declared is in part attributed to Andrei’s work, for what journalists do is they show the truth, and it is hard to escape the truth. I am sure that Andrei is watching us from up above and he would never regret what he did,” Markin said at a farewell ceremony Friday.

“Andrei was, is and will always be with us. May the memory of the hero live on,” he added.

“My colleagues at the Investigative Committee and I received the tragic news that DNA testing had proved Andrei’s death together with his colleagues when they were shot by the Ukrainian militants’ tank,” the spokesman said.

On Wednesday, Rossiya Segodnya Director General Dmitry Kiselev announced that according to information from the Russian Investigative Committee, Stenin, who went missing in Ukraine on August 5, died about a month ago near Donetsk when the car he was traveling in while on an editorial assignment was shot at and torched by Ukrainian forces on a highway just outside the city.

A farewell ceremony for Stenin was held Friday at the Rossiya Segodnya international press center for those wishing to pay their last respects to the photographer. The memorial service was held from 10 a.m. to 12 p.m. Moscow time (06:00 to 08:00 GMT). Later on, Stenin will be buried at Troyekurovskoye Cemetery in Moscow.