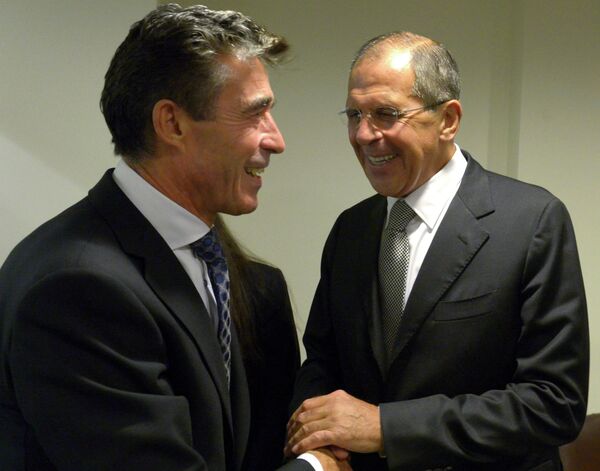 © RIA Novosti . Eduard Pesov
/
Go to the photo bank
Subscribe
NATO is not planning to suspend the NATO-Russia Council, however the alliance no longer sees Moscow as a partner, NATO representative said Wednesday.

NEWPORT, (Great Britain), September 3 (RIA Novosti) – NATO is not planning to suspend the NATO-Russia Council, however the alliance no longer sees Moscow as a partner, NATO representative said Wednesday.

NATO representative, who spoke under condition of anonymity, confirmed that alliance’s relations with Russia are ceased; however he stated that members of the alliance do not intend to abolish the NATO-Russia Council.

Earlier this week, NATO Foreign Ministers stated that the political dialogue in the NATO-Russia Council will continue as necessary.

“We have decided to suspend all practical civilian and military cooperation between NATO and Russia. Our political dialogue in the NATO-Russia Council can continue, as necessary, at the Ambassadorial level and above, to allow us to exchange views, first and foremost on this crisis. We will review NATO’s relations with Russia at our next meeting in June,” the official statement on Council’s website said.

As the Ukrainian crisis escalated, relations between Russia and NATO deteriorated. Heads of the alliance kept accusing Russia of meddling in Ukraine’s internal affairs, sending troops to Ukraine, and went as far as to claim that Moscow planned to invade Ukraine. However, none of these statements were supported with any evidence.

Moscow has repeatedly stated that it is not involved in Ukraine's internal conflict.

The NATO-Russia Council was established at the NATO-Russia Summit in Rome on 28 May 2002. In accordance with the Rome declaration, within the framework of the council, NATO member states and Russia work as equal partners in areas of common interest, which provides a mechanism for consultation consensus-building, cooperation, joint decision and joint action on a wide spectrum of security issues in the Euro-Atlantic region.