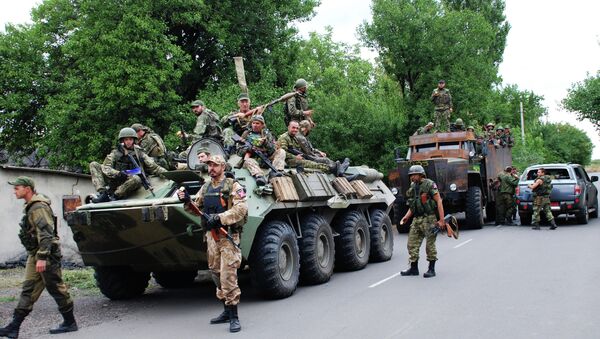 MOSCOW, September 2 (RIA Novosti) - Independence supporters have captured Polish soldiers that were fighting for the Ukrainian army, one of the Donetsk People’s Republic’s (DPR) leaders Leonid Baranov said on Tuesday.

“So far, there were only Polish [captured],” Baranov said when responding to a question about captured foreign mercenaries.

“There are many mercenary soldiers [fighting on the side of the Ukrainian army], it is particularly noticeable in Donetsk airport, which has been held for the longest period of time. Only professionals work there, there are not only Americans, people speak different languages there. This information is confirmed. We can say with certainty that there are foreign fighters who refuse to surrender,” Baranov said.

In August, one of the leaders of Luhansk People’s Republic (LPR), Aleksei Mozgovoi, told reporters that mercenary soldiers from the United States, Poland and the United Kingdom were fighting for the Ukrainian army. According to Mozgovoi, these soldiers are not only controlling the situation from Kiev, but are involved in actual fighting.

Since mid-April, Kiev has been conducting a military operation against the independence supporters in southeastern Ukraine who refused to recognize the legitimacy of the new government after a February coup.