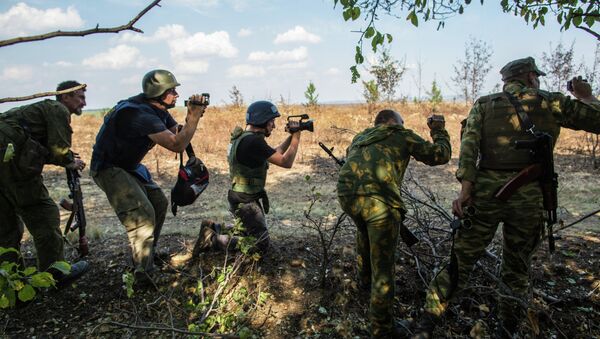 “Yesterday, in the area of the special military operation near Donetsk, the Right Sector representatives took correspondent Evgeniya Koroleva and photographer Maxim Vasilenko off the bus. After spending a few days in Donetsk and some other areas, which are currently being shelled [by Ukrainian Army], the journalists were heading back to Crimea, but today the connection with them is lost,” the paper’s representative said.

The representative added that Koroleva was given an opportunity to make only one phone call, during which she confirmed that they were detained not as regular citizens, but exactly as journalists.

The current whereabouts of the Crimean Telegraph journalists is unknown. The paper is asking for assistance in searching for the missing reporters.

Another Russian journalist Andrei Stenin was working in eastern Ukraine and has been unreachable beginning August 5. On August 12, an aide to the Ukrainian interior minister, Anton Herashchenko, said Ukrainian Security Service had arrested Stenin on charges of assisting terrorists, adding later that he did not really have information on the case and was misinterpreted.

Moscow has asked Kiev to comment on Herashchenko’s statement, but Stenin’s location still remains unknown. The photographer is said to be now on the Ukrainian militia’s missing persons list.