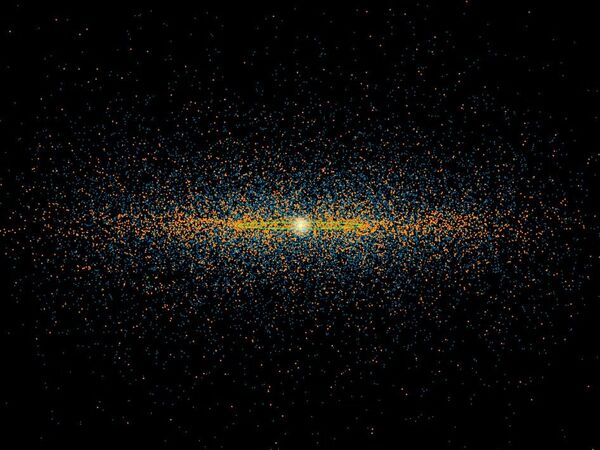 © NASA/JPL-Caltech
Subscribe
A project to protect people and economic facilities from the impact of space objects could be launched in Russia this year, Russian Emergencies Ministry has announced.

MOSCOW, August 25 (RIA Novosti) – A project to protect people and economic facilities from the impact of space objects could be launched in Russia this year, Russian Emergencies Ministry has announced.

“The Emergencies Ministry, working jointly with the Academy of Sciences, has been instructed to produce a design for a pilot project for the protection of people and social facilities from the impact of space objects,” reads a report by the ministry.

The issue received additional attention in Russia and worldwide after a meteor exploded over the city of Chelyabinsk in Russia in February 2013. The shock wave from that explosion shattered glass in over 7,000 buildings, injuring over 1,600 people. Economic damage was assessed at over 1.2 billion rubles (over $30 million).

Vladislav Bolov, Head of the Emergencies Ministry’s Natural Disaster Center, told RIA Novosti, that the impact could be much more destructive if the meteor had hit the city directly.

According to Boris Shustov, Director of the Academy of Sciences’ Institute of Astronomy, an impact avoidance system could be created in Russia by 2030. Today, no country in the world has the technology to destroy space objects similar to the Chelyabinsk meteor in the atmosphere.

Shustov said the system would comprise both ground and space elements. However, Russia has no federal targeted program that provides for creating this system.

The budget of the US asteroid impact alert system was tripled to $60 million after the Chelyabinsk meteor explosion.

NASA calculated that the Chelyabinsk meteor, which measured about 17 meters in diameter and weighed approximately 10,000 metric tons, entered the Earth’s atmosphere with a speed of about 18 kilometers per second, or almost 60 times the speed of sound. Judging by the duration of its flight, the meteor entered the atmosphere at a shallow angle.

The Chelyabinsk meteor was the largest celestial body, fallen to Earth since the Tunguska disaster in 1908. On average, such large impacts are registered approximately once every 100 years.

An impact with a near-Earth object (NEOs) that is more than one kilometer in diameter could result in a global catastrophe. Scientists have found approximately 120 very large asteroid craters on the Earth.

The largest mark in Russia is the Popigai crater in the north of the Siberian Platform. The internal diameter of the crater is 75 kilometers and the exterior diameter is 100 kilometers. The impact is dated to about 36 million years ago.

Smaller NEOs are also dangerous, because the shock and thermal waves of their explosion near populated areas can result in major destruction, comparable to the effects of a nuclear blast. It was a piece of good fortune that the Tunguska meteor hit a sparsely populated area in 1908 and hence did not lead to disastrous consequences.