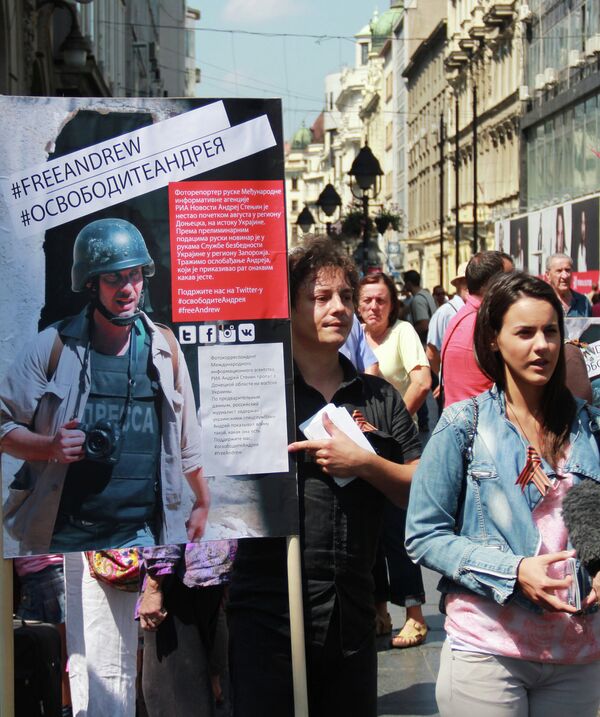 A rally to demand the release of Rossiya Segodnya’s photojournalist Andrei Stenin (#freeAndrew), who vanished in Ukraine in early August, was held Friday in downtown Belgrade, Serbia, a RIA Novosti correspondent reports.

The demonstration to raise awareness of deteriorating media freedom in Ukraine gathered over 50 activists of Serbia’s anti-fascist movement Dveri (Doors) as well as a group of journalists, who invited passers-by to sign a petition calling for Ukrainian authorities to locate the missing photographer.

“We believe that Andrei Stenin was doing his job in eastern Ukraine, same as in other hotspots, that is he showed what the war was really like. It was his job and while on this mission he was to be protected by the internationally recognized state, which is Ukraine,” Vladan Glisic, Serbia’s former presidential candidate and head of the Dveri movement, said.

Glisic added some 200 people had signed his petition, which he planned to hand over to the Ukrainian embassy in Belgrade.

“We think that Ukraine is to abide by international conventions for the protection of journalists and that brutality towards journalists must stop no matter where it takes place,” the Serbian politician stressed.

The event took place in Belgrade’s central Knez Mikhail Street. It wrapped up with activists releasing balloons that had pro-freedom slogans on them.

On Thursday, a German pacifist organization Friedenskreis (Circle of Peace) issued a petition saying Ukrainian President Petro Poroshenko must see to it that the Russian photo correspondent was set free “as soon as possible.”

Andrei Stenin went missing in eastern Ukraine on August 5 when he reported on the ongoing armed conflict, including from the cities of Donetsk and Slaviansk. He is feared to be held by Ukraine’s security service SBU on charges of terrorism.

Press freedom conditions in Ukraine, especially in the volatile southeastern regions, have steadily deteriorated in recent months, with journalists being detained, attacked, abducted and killed.