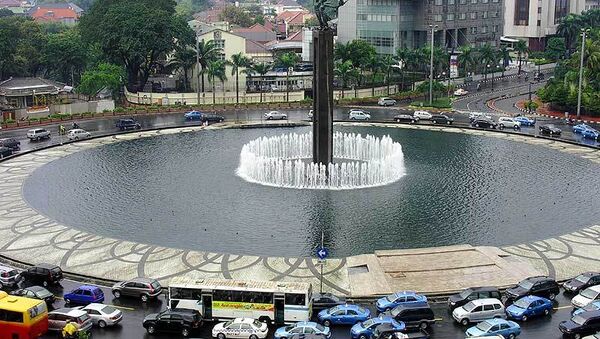 © Sputnik / Mikhail Tsyganov
Subscribe
As ISIS spreads across Syria and Iraq, Indonesia, the biggest Muslim-majority nation in the world, is preparing to combat domestic terrorism threats.

MOSCOW, August 15 (RIA Novosti) — As ISIS spreads across Syria and Iraq, Indonesia, the biggest Muslim-majority nation in the world, is preparing to combat domestic terrorism threats.

"We have to be prepared for when Indonesians come back from fighting in the Middle East. We have experience [of those who committed terrorist acts in Indonesia] after going to Afghanistan and the Philippines and we don't want ISIS veterans to do the same," said Sri Yunanto, Indonesia's national counter-terrorism agency adviser, as cited by the Financial Times.

Indonesian authorities expressed concerns over the increasing influence of ISIS in the Middle East, emphasizing that it may provoke the rise of homegrown militant movements. Citing Indonesia's counter-terrorism chief Ansyaad Mbai, the Wall Street Journal reports that 34 "hard-core" Indonesian terrorists have already joined ISIS jihadists in Syria and Iraq. Still, analysts believe the actual figure could be over 200.

Syria and Iraq have become a training ground for Indonesian "freelance" jihadists, notes Taufik Andrie, the executive director of the Institute of International Peace Building.
"Mostly Indonesian jihadis are driven by individual motivations, not necessarily by group's or leaders' comments. They have enough information from the internet, from Facebook and Twitter and that’s enough for them to decide… Freelance jihadi, individuals, it is just a matter of money," he said, as quoted by the Voice of America.

Meanwhile, more and more Indonesian radicals are openly pledging their loyalty to ISIS, both on the streets of Jakarta and on social media networks. Experts point to a noted increased in hate speech across the country, with it arising even in the mosques of governmental offices.

"Once I went for a Friday mass prayer at a mosque inside a government office; the title of the sermon was ‘The beauty of cutting hands'," Indonesia's counter-terrorism chief said as cited by the Wall Street Journal. "The next time I went to a different mosque at a different government office and the preacher was bad mouthing President [Susilo Bambang] Yudhoyono, calling him a lackey of Western governments," he added. Although "hate speech" is not considered a criminal action by the Indonesian state law, the counter-terrorism officials call for exceptional attention to be paid to such cases.

Indonesian leadership is preparing to crack down on jihadi movements in the country by officially banning the radical groups and prohibiting their teachings. Moreover, the government has announced it would revoke the citizenship of those Indonesian civilians who join ISIS, the Financial Times reports.

Indonesia previously faced threats of terrorism in the early 2000s, when a string of violent attacks resulted in deaths of hundreds of peaceful civilians. In response, the government conducted a large scale counter terrorist operation against Jemaah Islamiyah, a Southeast Asian branch of al-Qaeda.

The operation resulted in fragmentation of Jemaah Islamiyah into several smaller cells, with many extremists either killed or captured. However, experts fear the rise of ISIS could revive the Jemaah Islamiyah movement.