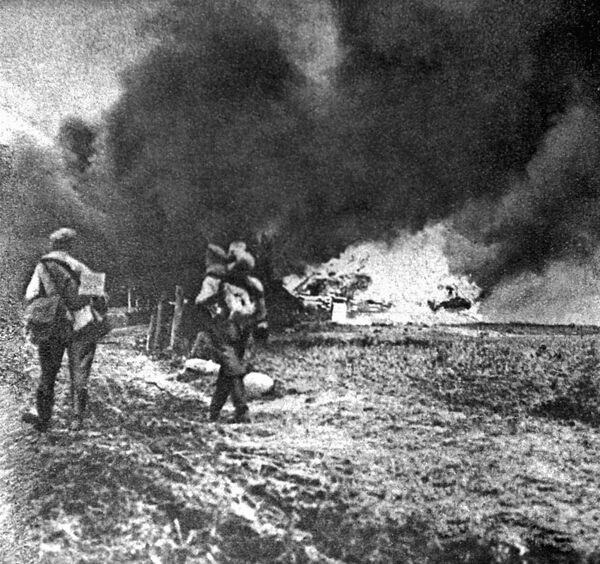 World War I marked a tragic turning point in Russian history and yet it has long been a forgotten war,Professor Sergey Mironenko, a Chair of Russia's history of XIX - early XX century from Lomonosov Moscow State University believes.

World War I marked a tragic turning point in Russian history and yet it has long been a forgotten war, Professor Sergey Mironenko, a Chair of Russia's history of XIX - early XX century from Lomonosov Moscow State University believes.

Russia was on the upswing on the eve of World War I. It was the fifth in the world in the scale of industrial production. Metal smelting and processing was making rapid headway, leading to the emergence of large industrial enterprises. Russia exported grain and agricultural machinery. However, despite the progress, the country was also beset by a number of urgent problems. The railroad system could not cope with the demands of the war, despite having made rapid progress in the preceding years. In early 1917, this led to food and ammunition shortages at the frontlines. Pyotr Stolypin’s agrarian reforms were impeded by the lack of cadastral surveys. Peasants found it very difficult to break free from the commune system for the same reason and were dissatisfied despite the fact that living standards improved after the 1861 reform. But the social crisis was overwhelming everything else, and Russia had been in a state of simmering revolution – which occasionally boiled over – since 1905.

In Soviet times the explanation was very simple: extreme hardship on the masses inevitably leads to revolution. The latest research shows that this is not always so; improvements can catalyze further improvements. However, the government thought reform was hopeless, and could merely retreat in the face of the exigencies of the time. The famous Manifesto of October 17, 1905 was a step back for Nicholas II, and the people knew it. Interruptions in bread supplies to Petrograd caused by the overburdened railroad system was the last straw. The accumulated social tensions exploded in the February Revolution.

I am convinced that the blame for the crisis lies with Nicholas II, among others. There are moments in history when one man becomes a bogeyman, a symbol of everything that’s wrong. For the intelligentsia and the political parties that emerged after 1905, Rasputin and his entourage came to symbolize the decay of the government and its inability to respond to the challenges of the time.

The false rumors of Rasputin’s affair with Nicholas’s wife Alexandra only scratched the surface. People claimed she transmitted secret information by direct line from Tsarskoye Selo to the Kaiser’s headquarters. When she came to the front to visit her husband, officers fell silent. Cadet leader Pavel Milyukov finished each passage of his famous tirade in the Duma in December 1916 with the same question: “What is it: stupidity or betrayal?” Nobody wanted to acknowledge that the setbacks at the front were due to incompetence rather than betrayal.

One of Nicholas’s gravest political mistakes was his decision to take personal command of the army in September 1915 and base himself out of the headquarters. Russia was then and still is a centralized country, and so the absence of the head of state in the capital for several years naturally had adverse consequences. When Nicholas decided to return, rebellious troops would not let him into Petrograd. His critics claim he had no right to abdicate, but he had no other choice after the commanders on all fronts called for it.

The confluence of these and other factors brought down the Russian Empire and the short-lived Provisional Government. The Bolshevik coup set the stage for the new, Soviet period of our history.

The Russian Empire could not stay out of World War I. Relations between Russia and Germany were fairly belligerent. The world was divided into antagonistic alliances, and war was inevitable. The only question was how to prepare for it.

Nicholas II and Russian military leaders were convinced that they would be able to rout the Germans in two or three months, and nobody even considered the possibility of a protracted war. When Germany declared war on Russia, the country was swept up in a wave of patriotic fervor. Chants and slogans about Russia’s imminent victory could be heard throughout the country. Of course, the war turned out differently than Nicholas and his generals assumed.

The Russian Army was primarily handicapped by poor leadership. Russian soldiers fought bravely, but the tactics employed by top military commanders were outdated. The failure of Russia’s invasion of East Prussia, its first battle of the war, was one of the worst disasters in Russian military history. About 100,000 Russian troops were encircled. Army Commander Gen. Samsonov shot himself, while the other commander, Pavel Rennenkampf, fled the battlefield. The Russian Guards were crushed at the Masurian Lakes.

When the homeland was in danger, officers of the elite Guards were always first to the fight. The loss of most of the well-trained and well-equipped Guard infantry at the Masurian Lakes played an enormous role in Russia’s subsequent history. When the Bolshevik coup began in Petrograd, the city only had reserve regiments and battalions consisting of peasants. The guards were loyal to the tsar and the homeland, while the peasant soldiers hated the existing system and easily fell for the Bolshevik bait – the promise of free land. Nobody could have predicted that in 15 years peasants would be stripped of their land, driven into collective farms and made to work “labor days” (labor payment according to labor days).

I believe the summer of 1917 was the final nail in the coffin of the Russian Army. The Provisional Government, in an effort to meet its commitments to allies, ordered an offensive, instead of trying to hold its positions. When the offensive failed, it unleashed chaos. It should not be forgotten that upon coming to power the Provisional Government issued an order establishing soldiers’ committees that completely undermined discipline and the chain of command. The army was disorganized and demoralized. Russia could no longer go on the attack by 1917.

It is essential to remember that Russia in the 19th century was a traditional ally of Germany. However, Alexander III made an abrupt turn to France. No wonder a bridge was named after him in Paris at the turn of the century. A Russian-French political alliance began to take shape and turned into the Entente with Britain’s accession. The world began to sort itself into different poles. Germany claimed that it needed to territorially expand because it was facing an overpopulation crisis and wanted more colonies. Over time economic and political interests began to predominate, and proved to be more important than kinship – Nicholas II and Kaiser Wilhelm II were cousins.

Russia fulfilled its commitments to the Entente. Marshal Ferdinand Foch wrote that if it hadn’t been for the Russians, Paris would have fallen and the French would have lost the First Battle of the Marne. Russia was diverting considerable German troops from the Western Front. But when Russia accepted the Treaty of Brest-Litovsk, the allies hurled accusations of betrayal and did not invite Russia to sign the Treaty of Versailles that ended WWI.

Let me repeat that Russia was no longer able to fight. The people and the army were exhausted by four years of war.

Under the peace treaty, Russia committed itself to supply Germany with meat and millions of tons of grain. It was literally feeding the German army. Russia gave up a large part of its territory – the Baltic lands and Ukraine went to Germany – but Lenin, a calculating politician, was counting on a world revolution anyway. It did not come to pass, but there was a revolution in Germany, leading Russia to immediately denounce the treaty.

World War I was quickly forgotten, and Russia has very few monuments to the fallen to this day. Paradoxically, in Europe, World War I is more widely commemorated than World War II. If you go to England, Scotland, Belgium or France, you will see that virtually every village – not to mention the cities – has monuments to the fallen in WWI, which were erected right after the war. In Russia the events of the Revolution and the Civil War eclipsed WWI, while the Soviet government deliberately eradicated it from public memory, leaving room only for the heroes who fought against the Whites.

The Bolshevik coup was the direct result of the change and hardship wrought by WWI. If war had not broken out, world history would have followed a completely different course. But history does not have subjunctive mood.