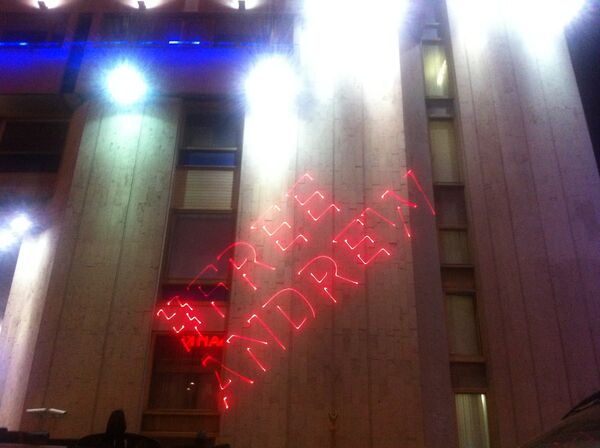 © RIA Novosti
Subscribe
Hashtags calling for the release of Rossiya Segodnya journalist Andrei Stenin were projected on Tuesday night on the façade of the news agency’s building to raise awareness of the incident, in which a Russian photo correspondent on mission to eastern Ukraine was unlawfully seized by the Ukrainian Security Service.

MOSCOW, August 13 (RIA Novosti) – Hashtags calling for the release of Rossiya Segodnya journalist Andrei Stenin were projected on Tuesday night on the façade of the news agency’s building to raise awareness of the incident, in which a Russian photo correspondent on mission to eastern Ukraine was unlawfully seized by the Ukrainian Security Service.

The agency said that #FREEANDREW hashtags in English and Russian will stay until Stenin is freed by the regime in Kiev. Hashtags are used to mark keywords or topics on Twitter, and have been very popular in online communication.

Scores of Stenin’s colleagues gathered on Tuesday afternoon outside the international news agency to protest the photographer’s detention following Kiev’s confession to the abduction. The event was held in the courtyard of the Rossiya Segodnya International Information Agency, where a large chalk #FREEANDREW inscription was made on the asphalt.

Stenin went missing on August 5 when he was reporting on the conflict in eastern Ukraine, including from the cities of Donetsk and Slaviansk. An unnamed source told RIA Novosti earlier the photojournalist had been abducted by Ukrainian militia and was in the custody of Ukraine’s Security Service (SBU) in the city of Zaporozhye, and allegation the SBU later denied.

But on Tuesday Anton Herashchenko, an adviser to Ukraine’s minister for internal affairs, told Baltkom radio that Stenin had indeed been detained by the SBU for allegedly "aiding terrorists." Dmitry Kiselev, director-general of International Information Agency Rossiya Segodnya, described the charges against Stenin as “artificial and ludicrous."

Press freedom conditions in Ukraine, especially in the volatile southeastern regions, have steadily deteriorated in recent months, with journalists being detained, attacked, abducted, and killed.

Stenin’s abduction is not the first incident of mass-media workers coming into harm’s way in Ukraine. Back in June, a cameraman for Russia’s Channel-1 TV station was fatally wounded in the stomach. Prior to that, a reporter and a sound engineer from Russia’s VGTRK media holding were killed in a mortar attack near Luhansk.

Please support Andrei Stenin's release by sharing the hashtag #FREEANDREW in social networks. Andrei is a professional photographer reporting from the most dangerous war zones in the world. You can view Andrei's pictures from Iraq, Egypt, Syria, Libya <here> and his most recent shots from eastern Ukraine <here>.