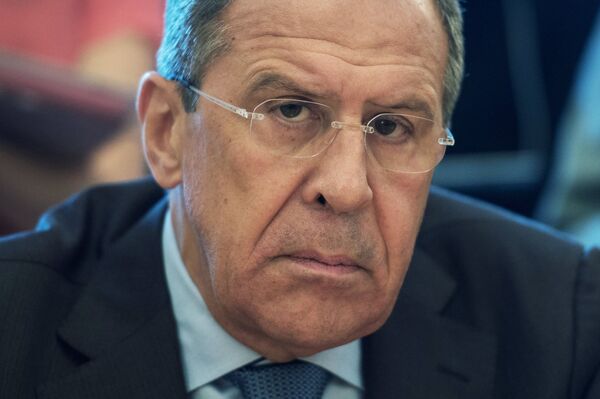 Russian Foreign Minister Sergei Lavrov Monday called on the West not to impede the delivery of urgent humanitarian aid to war-torn eastern Ukraine.

"Hopefully, this humanitarian action will take place soon under the aegis of the International Committee of the Red Cross,” Lavrov told reporters in the Black Sea resort of Sochi.

“We have agreed all the details with the Ukrainian authorities. I hope that our Western partners will avoid putting obstacles [to the delivery of humanitarian aid],” Lavrov said.

The minister sharply criticized recent statements by officials in London, Washington and Berlin that eastern Ukraine does not require humanitarian assistance despite the worsening situation in the regions caught in armed clashes between Kiev-led forces and independence supporters.

“If it is true that the three leaders agreed in phone contacts that there is no need for humanitarian aid to east Ukraine as all necessary measures are already being taken – it sounds like the epitome of blatant cynicism,” Lavrov said.

Earlier Monday, Russian presidential spokesman Dmitry Peskov said that humanitarian aid to the war-torn southeastern Ukraine will be rendered immediately after all conditions are settled.

Last Tuesday, at the UN Security Council Russia offered to deploy an international humanitarian mission with Russian humanitarian aid under the auspice of the International Committee of the Red Cross in Ukraine’s troubled eastern regions.

Soon after that, Kiev said it would manage on its own and denied that there was a humanitarian crisis in the country. Late Friday, the International Committee of the Red Cross welcomed Russia’s proposal.

A number of Western countries, including the United States, Canada, Britain and Germany argued that Russian humanitarian aid should only be delivered to Ukraine after Moscow secures Kiev’s consent, otherwise it would be “unjustified and illegal."

The Russian Foreign Ministry repeatedly stressed the necessity of urgent measures to avert a looming humanitarian catastrophe in Ukraine’s southeastern regions and urged its Western partners to support its humanitarian mission.