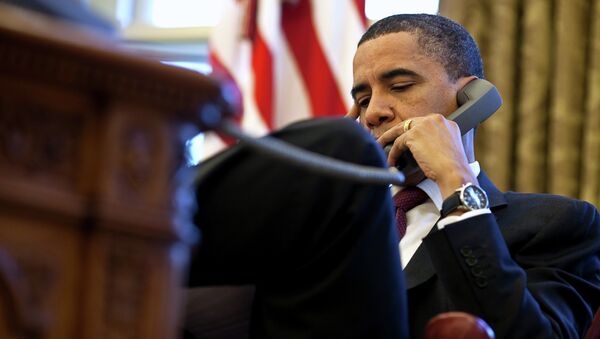 © Photo : White House / Pete Souza
Subscribe
The United States and Britain believe that any humanitarian mission, which Russia may deploy in Ukraine, would be “unjustified and illegal,” British Prime Minister's Office reported on Saturday.

MOSCOW, August 9 (RIA Novosti) – The United States and Britain believe that any humanitarian mission, which Russia may deploy in Ukraine, would be “unjustified and illegal,” British Prime Minister's Office reported on Saturday.

The comment was made during a phone conversation between British Prime Minister David Cameron and US President Barack Obama.

“The Prime Minister and President are absolutely clear that such a so-called humanitarian mission would be unjustified and illegal. There are already a number of international aid agencies, providing appropriate assistance on the ground in Eastern Ukraine and they urge Russia to desist from such a move,” the statement said.

Earlier in the day, Russian Foreign Minister Sergei Lavrov held phone negotiations with US Secretary of State John Kerry and stressed the necessity of urgent measures to avert a looming humanitarian catastrophe in Ukraine’s southeastern regions. The Russian top diplomat urged to support Russia’s initiative on the deployment of a humanitarian mission in Ukraine’s southeast and Kerry confirmed such work is currently being conducted with Kiev authorities.

Lavrov also talked over the phone with British Foreign Secretary Philip Hammond and informed him about Russia’s efforts to provide citizens of Ukraine’s southeast with humanitarian assistance.

On Tuesday, Russia came up with a proposal at the UN Security Council to deploy an international humanitarian mission with Russian humanitarian aid under the auspices of the International Committee of the Red Cross in eastern Ukraine.

Russian Ambassador to the UN Vitaly Churkin said that Moscow is calling on the international community to take urgent measures to render humanitarian assistance to the citizens of Ukraine’s east. In this case, Churkin stressed, Russia was ready for “highest possible transparency.”