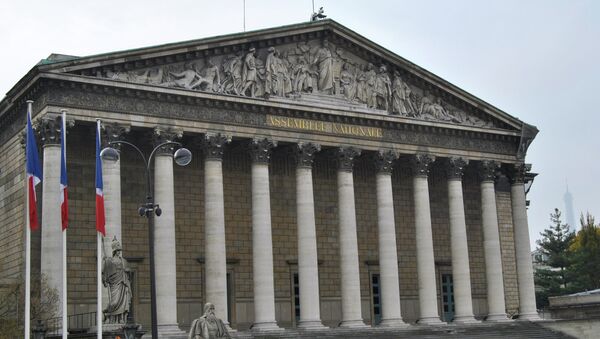 "The European Union and its member states have made a serious mistake [by imposing sanctions on Russia] because the Ukrainian conflict involving Russian-speaking rebels is a completely regional conflict, a consequence of the Soviet Union collapse and what had happened before, in particular, during the Second World War, when many Ukrainians fought alongside the Nazis," Myard said.

Instead of limiting this internal conflict, the European Union has turned it into an international conflict between Russia, the EU and the United States by imposing sanctions, the lawmaker stressed.

"These measures are escalating the situation, international tension are on the rise, while, on the contrary, one should always avoid the policies leading to the internationalization of a conflict," the parliamentarian said.

France has strong positions on the Russian market, including automotive industry and technology sales, Myard added.

"Under current conditions, when France is experiencing economic, financial and budgetary difficulties, it’s at least suicidal to harm our exports to Russia, which are important and necessary for the creation of jobs in France and for our trade balance. The government and the EU are acting as fools," the French lawmaker said.

According to Myard, there is no such thing as EU's international policy as EU member states have different interests and, in particular, a different history of relations with Moscow.

"France should pursue an independent policy and defend its own interests, of course, in alliance with other countries, but the alliance does not mean that we should fully align with the United States or the Baltic countries or Poland and their fears," the parliamentarian concluded.

On Wednesday, Russian President Vladimir Putin signed an order on economic measures to protect the country’s security. The decree banned for a year imports of agricultural and food products from several countries that have imposed sanctions on Russia over the Ukrainian crisis.

The complete "blacklist" of food imports from Australia, Canada, the European Union, the United States and Norway was announced Thursday. The list includes meat, poultry, fish, seafood, milk, dairy products, as well as fruits and vegetables. The embargo does not include infant foods and products.

The European Union, the United States and some other countries have compiled sanctions lists against Russian companies, banks, politicians, as well as the financial, energy and defense sectors of the Russian economy. The move has been linked to the ongoing conflict in Ukraine.

Russian Prime Minister Dmitry Medvedev said he hoped the embargo would put the "economic pragmatism" of the Western partners above "ridiculous political ideas" and cooperation would be restored in previous volumes.