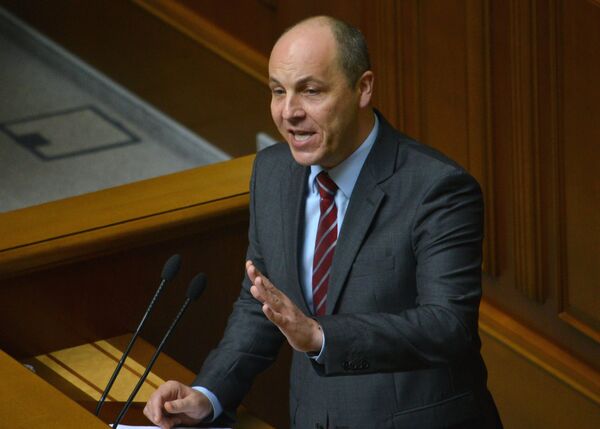 © RIA Novosti . Yevgeny Kotenko
/
Go to the photo bank
Subscribe
The head of Ukraine’s National Security and Defense Council Andriy Parubiy said Thursday he had tendered his resignation and the country’s president had accepted it.

KIEV, August 7 (RIA Novosti) – The head of Ukraine’s National Security and Defense Council Andriy Parubiy said Thursday he had tendered his resignation and the country’s president had accepted it.

“I consider it inadmissible to comment on my resignation while the war continues. I continue to aid the military, first of all to battalions of volunteers,” Parubiy wrote on his Facebook page.

“Parubiy will always be part of the president’s team whatever the job he fills,” Poroshenko's spokesman Svyatoslav Tsegolko said on Twitter, adding the country’s leader thanked the chief of the national security council for good work.

Parubiy rose to prominence following the February coup in Ukraine where he helped coordinate volunteer security corps during the uprising at Kiev’s central Maidan Square. He was appointed Secretary of the National Security and Defense Council by newly-elected president Poroshenko on June 16, 2014.

During his time in office, the ex-activist oversaw the government’s “anti-terrorist” operation in the southeast of Ukraine.

In mid-April, Kiev authorities launched a special military operation against the country’s growing independence movement. Hundreds of people, including civilians have died over the past months as a result of the conflict.