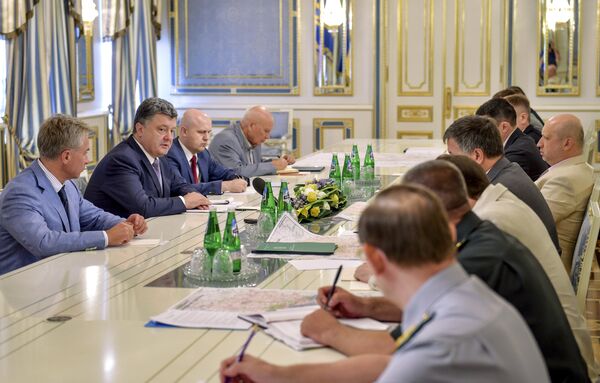 “In line with my instructions, the defense minister has fired the managers who are responsible for the rear [troops], provisions and weapons,” Poroshenko said during a meeting with volunteers helping the Ukrainian Army.

Poroshenko said the decision to sack the people in charge of armament purchases and tendering came in the wake of an investigation by the prosecutor general’s office, which discovered that the army budget had been used inefficiently.

The Ukrainian president did not identify the fired officials, but said their jobs had already been filled by new people who officially assumed their responsibilities on Wednesday.

Poroshenko also suggested volunteers should be given monitoring powers on councils responsible for providing catering support to the Ukrainian Army.

The fighting in eastern Ukraine broke out in mid-April, when, following a February 22 coup, the newly-instated Ukrainian government launched a military operation to suppress independence supporters, who have refused to acknowledge the new authorities. Hundreds of people, including civilians, have died over the past months.

Moscow has described Kiev’s actions as a punitive operation and has several times called on the Ukrainian government to cease the bloodshed.