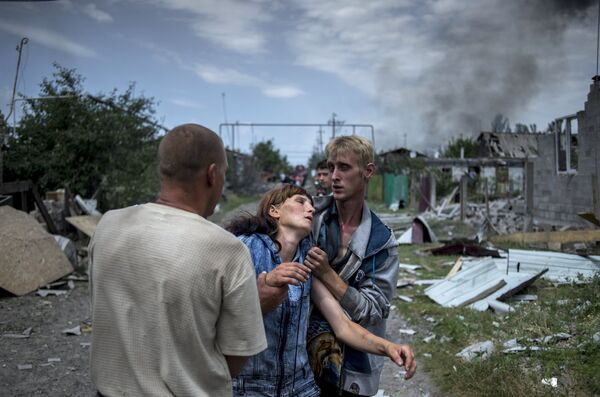 © RIA Novosti . Valery Melnikov
/
Go to the photo bank
Subscribe
Four million people are in the combat area in eastern Ukraine, and 200,000 of them are deprived of water, Russia’s UN envoy Vitaly Churkin said Tuesday at an emergency UN Security Council session on the humanitarian situation in Ukraine.

UNITED NATIONS, August 6 (RIA Novosti) - Four million people are in the combat area in eastern Ukraine, and 200,000 of them are deprived of water, Russia’s UN envoy Vitaly Churkin said Tuesday at an emergency UN Security Council session on the humanitarian situation in Ukraine.

“About four million people are in the war zone [in Ukraine.] Over 200,000 of them are deprived of potable water. Sanitary and epidemiological situation is critical in Luhansk,” Churkin said.

According to Russia’s UN envoy, residential houses have no electricity or water supply, water is not decontaminated, landline and mobile communications are cut, refuse is not removed.

“Ukrainian nationals are leaving the country in masses,” Churkin said and precised that since the start of the crisis almost 800,000 people have crossed the border with Russia and have stayed there. “The number of people who applied to the migration services to legalize their stay is up to 170,000.”

Despite international arrangements, including April 17 Geneva Accords and Berlin 2 Accords, signed by the Ukrainian authorities, Kiev continues “scaling up military activities at the expense of hundreds and thousands of lives.”

“With that, according to the available information, the key role here is played by the punitive squads that do not directly obey by the Ukrainian Military Forces’ orders, but by the orders of the country’s odious Security Council and local oligarchs sponsoring it,” Churkin stressed.

He added that airstrikes became a day-to-day business, as well as the use of artillery, tanks, multiple rocket launchers, phosphorus bombs. “Residential areas and infrastructure are shelled. In many cities up to 80 percent of the houses have been destroyed. Overall, according to the modest estimates, over 600 buildings have been destroyed,” Churkin said.

According to a report by the mission of the United Nations Office for the Coordination of Humanitarian Affairs (OCHA), since the start of the special operation in eastern Ukraine in mid-April, a total of 1,367 people have been killed and another 4,087 wounded, including 2,589 civilians and 29 children.