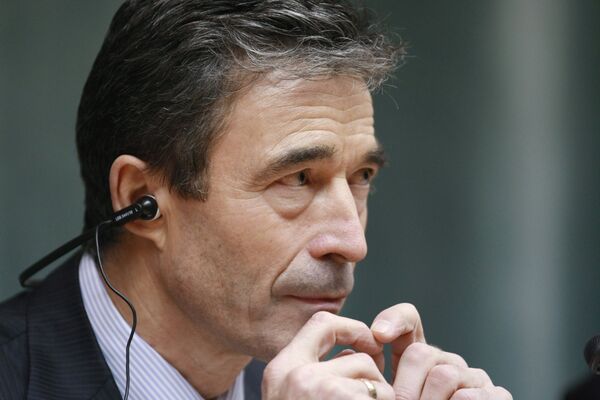 In a Sunday interview with French newspaper Midi Libre, Rasmussen reiterated claims of Russia’s direct responsibility for the escalation of the Ukrainian crisis and alleged support of armed militia in the self-proclaimed Donetsk and Luhansk People’s republics.

"Anders Fogh Rasmussen, using a confrontational tone, is trying again to shift the responsibility for the escalation of the crisis in Ukraine on Russia," the ministry said in a statement.

At the same time, the NATO chief is completely ignoring the fact that Kiev authorities are waging war against Ukrainian people, leading the country to a deep humanitarian crisis, the ministry said.

«This leads to a conclusion that the NATO leadership is still unable to put the interests of long-term stability and security in Europe ahead of its own geopolitical goals," the statement said.

The ministry also criticized NATO for ignoring the recent statement by UN High Commissioner for Human Rights Navi Pillay about the United Nations not possessing any hard evidence that Russia supplied independence supporters in eastern Ukraine with weapons.

The ministry said last week that the most likely explanation of the West, including its media, ignoring the statement was that it did not fit the "campaign of disinformation, which aims at trying to shuffle off the responsibility for the events in Ukraine onto Russia."

Washington and Kiev have both claimed they have proof that Russia had been supporting the Donetsk and Luhansk republics by providing them with military equipment. However, no evidence has been made public so far either by the United States or Ukraine.

Moscow has denied supporting militia forces in turbulent Ukrainian regions and said last week the Kiev government intensified military operations against its own people after getting support from Western countries.

In mid-April, Kiev launched a military crackdown on independence supporters in eastern Ukraine. According to the latest UN report, the conflict has claimed the lives of more than 1,100 civilians since then, with nearly 3,500 injured.

Moscow has repeatedly condemned Kiev’s "war against its own people" and urged an immediate stop to the punitive operation, advocating a peaceful resolution to the crisis.