Dobrolet Flights Suspension Not to Affect Access to Crimea - Ministry 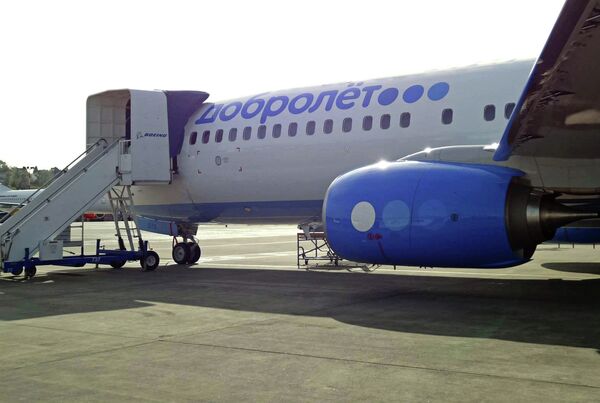 The suspension of flights by Russia’s Dobrolet airline is not expected to affect transport accessibility of the Black Sea Peninsula, Russia’s Ministry of Transport said on Sunday.

MOSCOW, August 3 (RIA Novosti) – The suspension of flights by Russia’s Dobrolet airline is not expected to affect transport accessibility of the Black Sea Peninsula, Russia’s Ministry of Transport said on Sunday.

“According to estimates, in 2014 the airport in Crimea’s capital is to serve 2.2 million passengers,” the ministry said.

The ministry said some 60,000 passengers, who have bought tickets for Dobrolet flights to Simferopol are to be flown by Orenburg Airlines (Orenair) until September 15.

Russia’s low-cost airline, Dobrolet announced Sunday it is temporarily suspending all the flights, including to Crimea, since Monday amid the recently introduced EU sanctions.

«In connection with the annulled lease agreement of Boeing-737-800 aircraft amid sanctions, introduced by the European Union against the Dobrolet air company, we have been forced to temporarily suspend the flights along all the routes since August 4, 2014," the company said in a statement on its website.

A subsidiary of state-owned Aeroflot airline, Dobrolet, launched its first commercial flights from the Russian capital to Crimea’s Simferopol in June.

In July, the air company started selling tickets for flights to cities across Russia, including Volgograd, Perm, Samara, Ufa, Yekaterinburg and Kazan.

Dobrolet was included on the EU blacklist, unveiled on July 30 among other Russian entities targeted by sanctions over their alleged role in the escalation of the Ukrainian crisis.

Earlier this year, the United States and the European Union imposed targeted sanctions against a number of Russian officials and companies as a response to Crimea’s reunification with Russia.

Russia’s Foreign Ministry has repeatedly called the language of sanctions counterproductive and said these measures would have a boomerang effect on European economies.