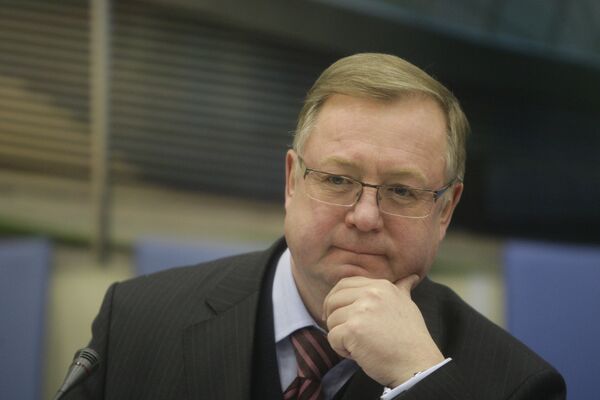 Days after the Malaysian jet carrying 298 passengers crashed in the Donetsk Region, Cameron told The Sunday Times that the tragedy resulted from Russia destabilizing Ukraine.

“This is a direct result of Russia destabilising a sovereign state, violating its territorial integrity, backing thuggish militias and training and arming them. We must turn this moment of outrage into a moment of action,” UK prime minister asserted.

Stepashin, ex-Chairman of Russia’s Accounts Chamber, said Russia is insulted by this “unfair and wrongful accusation, based on falsehood.”

In an open letter, the Russian politician pointed out that Cameron had expressed unequivocal support for the Ukrainian authorities while trying to convince Europe and the West to fundamentally change their approach to Russia.

Stepashin also said statements that pro-independence activists do not represent the people of Ukraine means that the West only supports the new Ukrainian government that refuses “to consider anyone, who disagrees with them, citizens of Ukraine.”

Stepashin said Cameron’s recent claim that militia is behind the Malaysian plane crash is “outright lie,” noting that “vice versa, every day there is more and more evidence proving facts opposite to this statement, confirming that the plane was shot down by Ukrainian military.”

Shortly after the Malaysia Airlines Boeing 777 tragedy, the Russian military published data revealing that a Ukrainian combat jet was detected in close approach to the Malaysian passenger plane right before it crashed. Stepashin noted that the fact that Kiev was enhancing air defense in the area of the plane crash just before the tragedy proves that this accident was a “trap prepared by Ukrainian military.”

The fake “evidence of talks between militia-members” made by Ukrainian SBU in advance of the crash is proof that this crime was being prepared by Ukrainian secret services, which are controlled by CIA, Stepashin wrote. He believes that the aim of this provocation is to embroil Russia in a war.
Stepashin also said the tragedy is a direct result of Europe supporting coup d’etat in Ukraine in February.

The new Ukrainian government’s actions led to the inhumane slaughter of peaceful citizens in Odessa, where people were burnt alive, and left thousands of residents of Mariupol, Slaviansk, Kramatorsk, Luhansk killed in the course of military operations, Stepashin stressed.

“While the Ukrainian government committed mass murders that did not touch your citizens, you paid no heed to the daily shelling and bombing of cities in Eastern Ukraine,” he said. Now, this warzone has claimed the lives of Europe’s own people.

Stepashin warned that before laying the blame, NATO indeed should remember lessons of history, emphasizing that it was unacceptable to push unfounded accusations and provoke war. He believes that lies and violence should not be used in political interests.

The Russian statesman recalled WWII, noting that in 1938 the then British Prime Minister Chamberlain and other European leaders had supported Hitler, playing him off against the USSR. Another example he mentioned was the war in Iraq, which led to an uncountable number of deaths and the destruction of a country accused of possessing nuclear weapons it, in truth, did not have.

He also mentioned bombing of Belgrade and the results of the Arab Spring in Libya as illustrations of such unlawful actions, emphasizing that “these criminal actions took lives of millions of innocent people.”

Stepashin urged the international community to conduct a thorough investigation of the Malaysian Airlines flight MH17 plane crash, adding that Russia, as requested, has already provided “the most detailed information about the incident,  as well as contributed to collecting physical evidence and recovering the victims’ bodies.”

He expressed hope that based on the materials gathered experts will be able to reach an objective conclusion.